If Only You’d Been There: A Sermon for the 149th Annual Meeting of the Connecticut Conference 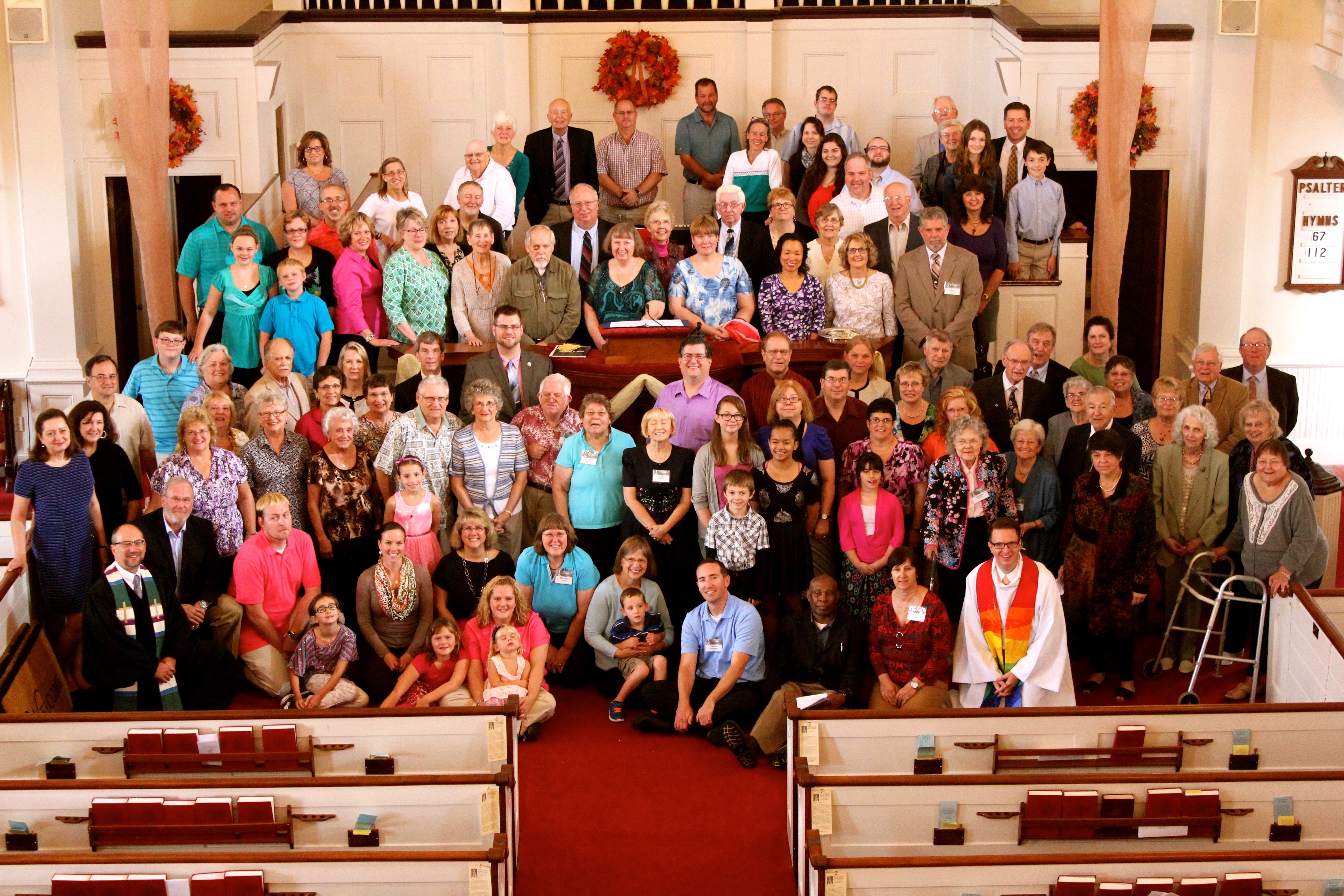 Nearly three years ago, I was asked to serve as Conference Preacher for the 149th Annual Meeting of the Connecticut Conference. No doubt, it’s an honor. There are nearly 400 UCC clergy in Connecticut, so there are lots of people who’d do this job justice. Now, I’m confident in my preaching skills, but I’m certainly no star preacher. And in the weeks leading up to the event, I kept thinking to myself, “Why would they pick you? Have they even heard you preach?” And the answer that came to me was this: “They didn’t pick you because you could or couldn’t preach. They picked you because they wanted to hear what you had to say.”  So, here’s what I said.

Scripture: John 11 (The Story of Lazarus)

In seminary, I had a professor who told us that you should never start a sermon with a joke—that it was a cheap way to begin, that it was pandering. Well, luckily for you, he isn’t here. So here’s what I’ve got: A priest, a rabbi, a Southern Baptist minister, Kent Siladi [the Connecticut Conference Minister] and a dog walk into urgent care each exhibiting symptoms of the flu. One had a headache, one had a fever. Another had a cough, another a sore throat, another a runny nose. They wait and wait, and are finally called back to an exam room. The nurse walks in, looks around, and says, “What is this, some kind of sick joke?” There it is. That’s what I’ve got. It’s all downhill from here.

Will you pray with me? Guide us, O Lord, by your Word and Holy Spirit, that in your light we may see light, in your truth find freedom, and in your will discover peace; through Jesus Christ our Lord. Amen.

I’m not sure there are more uncomfortable chairs than the ones my father and I kept vigil in at my mother’s hospital bedside the five, long days it took her to die. I was a second year M. Div. student, and all of my colleagues were walking a fine line between being friends and being pastors. They would call. Sometimes I would answer; sometimes I wouldn’t. Most of the time, Dad and I just sat—listening to Mama’s slow, uneven breaths that made us ask the nurse each morning, “How much time do is left?”

Those five days lasted a lifetime. And at the end of them, I remember thinking that I had never been so heartbroken and so relieved. The drive to the funeral home was silent. Dad didn’t quite know what to ask or what to do so I took the lead. We were quiet again as we drove to the Waffle House just off I-85, twenty minutes south of Atlanta where I was raised. “It’s the first time it’s just us,” I said in the parking lot. “We’ll get used to it,” he replied.

Looking back on it now, the nine months from my mother’s diagnosis with Non-Hodgkin’s Lymphoma to the Halloween afternoon she passed away was a period of seismic change for me. I see my life in two parts: when mama was alive and when she wasn’t.

I remember sitting in that room experiencing nearly every emotion possible, but the one that surprised me the most was abandonment. Even before Mama died, I knew that her absence would change everything in my life. And already, I could feel a sense of abandonment.

Shortly after her death, the story of Lazarus came to mind. One night, I flipped my Bible open to John 11 and started to read. Now John 11 has a couple of famous lines—the most familiar of which is in verse 35—which in some translations is two words: Jesus wept. People love the emotion of the story of Lazarus, they love that Jesus experienced human emotion—it makes us feel closer to Jesus.

Which, I’ll admit, I find a little odd. Because Jesus isn’t really who I identify with in John 11. I identify with Martha. Now you know Martha and her sister Mary. We’ve met them before as central characters of Jesus’ teachings around embracing a life of faith.  In that story, Martha is cast as the workaholic, do-gooder and Mary is the free spirit, learning at the feet of her teacher. But in John 11, it seems like Martha took Jesus’ words to heart. And rather than waiting for Jesus to even make it to their home, Martha defies social convention and the cultural expectations of the day and leaves the house to go meet him on the road. And in a moment that can only be classified as faithful desperation, she says, “Jesus, if you’d only been here, my brother wouldn’t have died.” Now there are a couple of ways we could read that line. Maybe its a simple stating of the obvious. But I tend to read it with a touch of sarcasm. We have a unique term for that in the South. We’d call that: pissyness. When I come across this line, what I hear is this: “Lord, if only you had been here, if only you had cared enough, if only you had hurried up, if only we had mattered enough, my brother wouldn’t have died. Thanks a lot.” 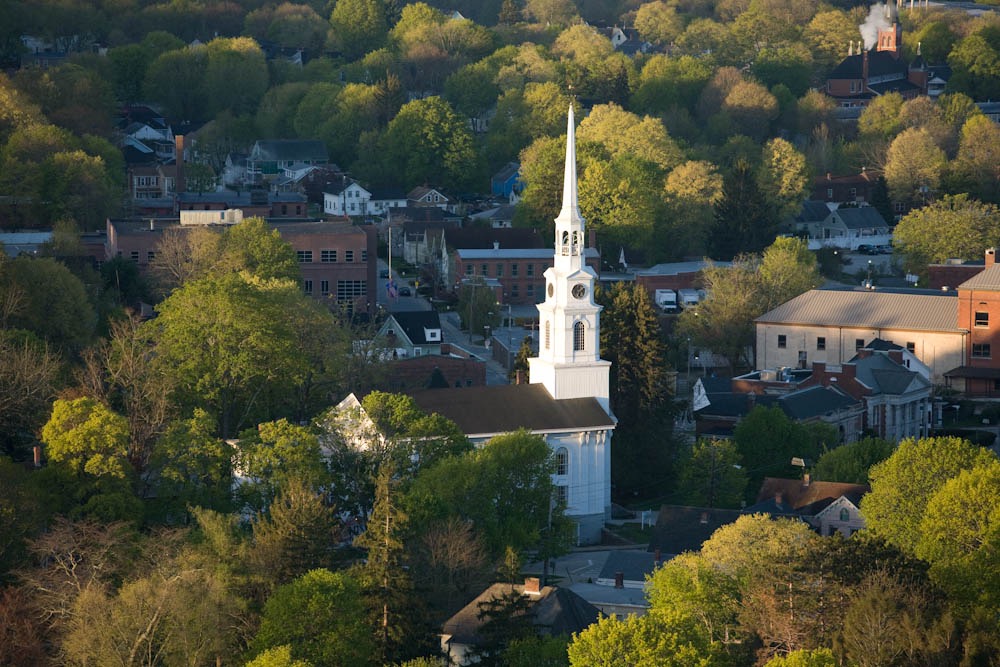 The church I serve in Killingly, Connecticut certainly felt that way. Fifteen years ago they didn’t know whether or not they were going to make it. The beautiful, historic building that had housed the congregation since 1854 was more an albatross than anything else. And like most mainline churches, attendance had been dropping for years, and with it, pledged income. Pews were empty and spirits were down. In the winter months, they would meet in the Ladies’ Parlor because it was big enough for the 30 or so people they expected on Sundays and cheaper to heat.

My church, Westfield, went through a seven and a half year interim period. Seven and a half years—that’s nearly unheard of. And in those 90 months, they dealt with a lot. They confronted what it meant to be a dying church.Their first interim told them two hard truths: (1) you can’t afford a full-time pastor and (2) if things don’t change, the only path forward is merger or closure.

That’s when the grieving started, and like any kind of grief, it manifested in tears, in anger, in silence. And through those tears and gritted teeth, came Martha and Mary’s words: Jesus, if only you were here, this wouldn’t have happened.

The second interim minister heard that despair, the longing in their voices, and said to them, in what is one of the most Christ-like sentiments I’ve ever encountered, “you know, it doesn’t have to be this way.” And just like that, Westfield found what they had been missing all along, what they assumed had disappeared for good. They found hope. 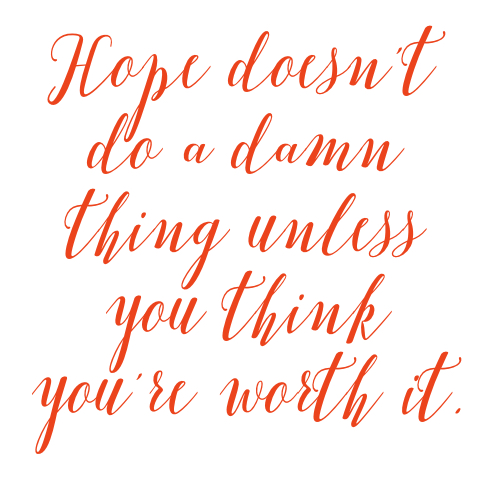 But you know something, hope doesn’t do a damn thing if you don’t think you’re worth it. Westfield had hope that things could be different. But they needed to believe that they were worth it. And here’s where we take another clue from Mary and Martha. You see Mary and Martha wouldn’t have confronted Jesus if they didn’t think Lazarus was worth it, if they didn’t think their family was worth it.

And it turns out, he could.

You know what happens next. Jesus walks to the tomb Lazarus has been laid in, and tells the crowd gathered to roll the stone away. “Oh no,” you can hear the people say. “We can’t do that. He’s been in there four whole days! He stinks!” Or, to put it modern-day church terms, “we’ve never done it that way before!” 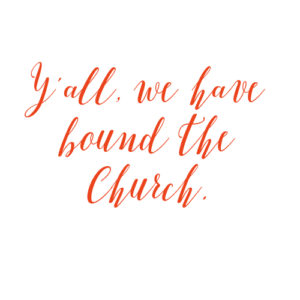 Well, we can be sure that the gathered crowd perceived it. Because Jesus walked right up to that stone, commanded the crowd to roll it away, then shouted, “Lazarus, come out!” And that is what came to pass.

The temptation is for us to think that’s the end of the story. But there’s one more verse, and it holds , as far as I’m concerned, the key to
church vitality, renewal, and revival. It’s six words: Unbind him, and let him go. We don’t know who, exactly, Jesus was talking to that day. But in a way he’s talking to each of us.

But here’s the good news: Jesus is calling to us today, to us as individuals and leaders and churches and as the Connecticut Conference and the United Church of Christ to unbind the Church and let it go—to let new life be breathed into the church, to let new vitality pour from it. 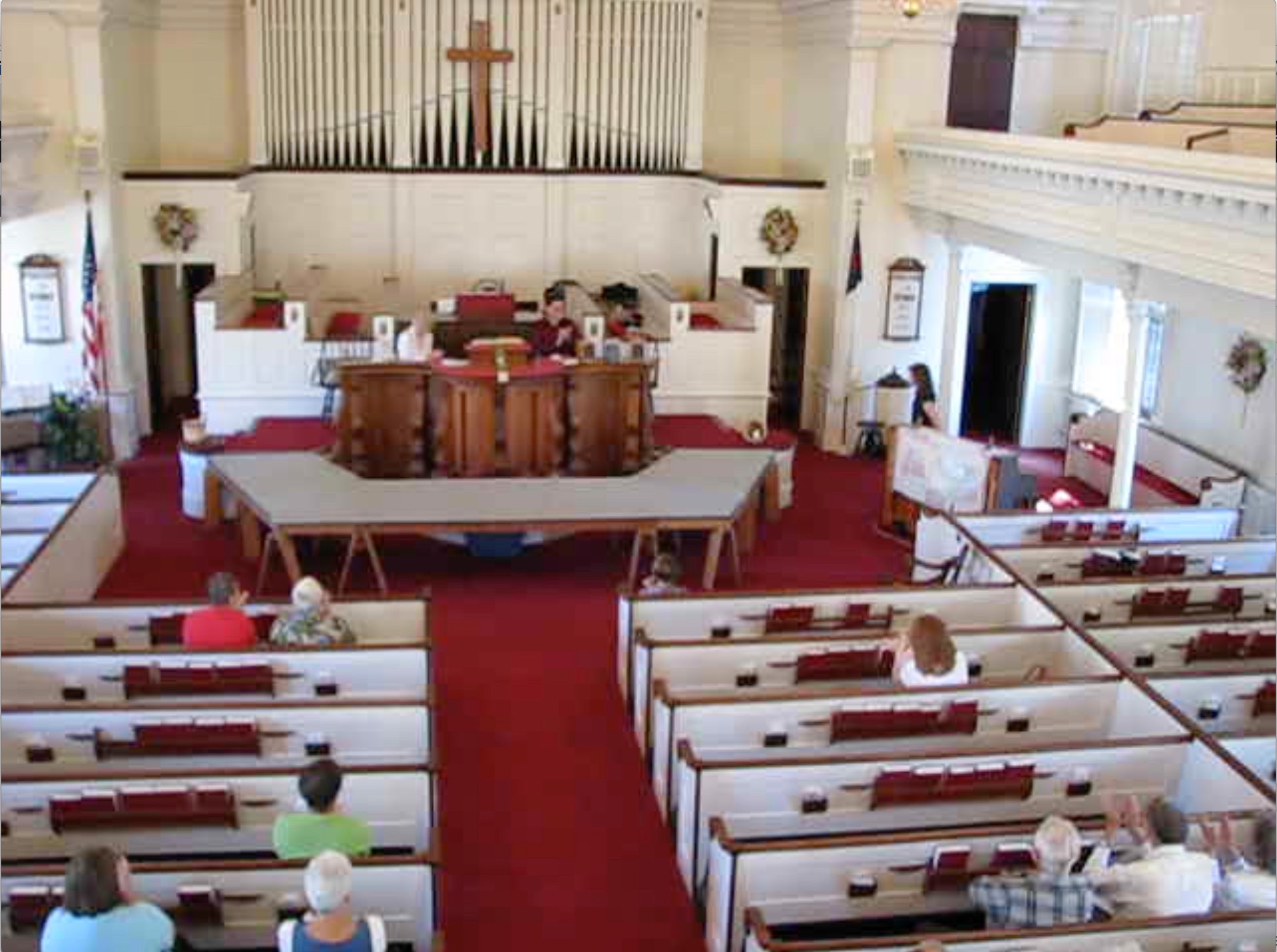 A couple of weeks ago, I found a jump drive with some videos on it of a Westfield worship service from 2009. Our lay liturgist was at the front with our lay moderator. Counting those two, you can see twelve people in the sanctuary.  I watched that video at my desk with tears in my eyes. There before me was a congregation that thought it was as good as dead. They heard the call of Jesus—to let go of the things that were binding them. 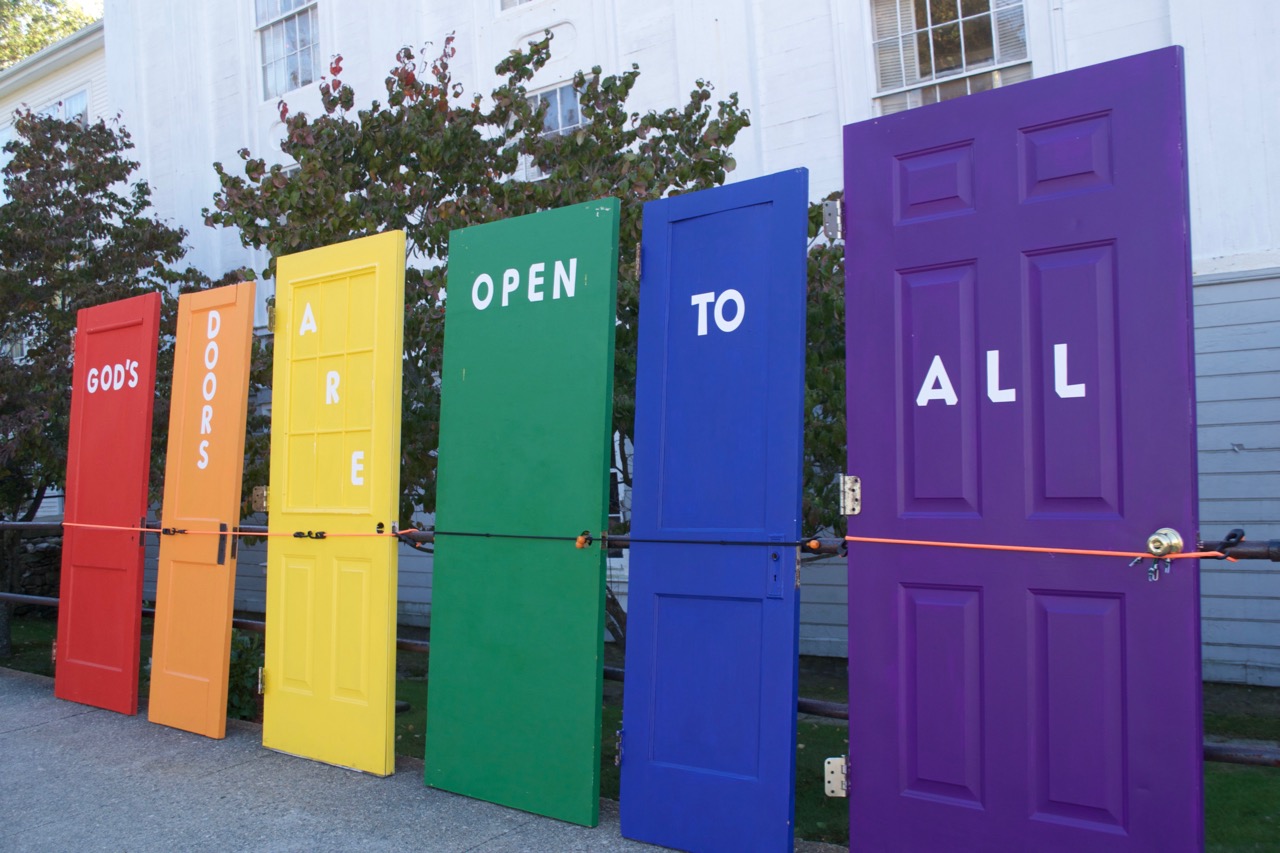 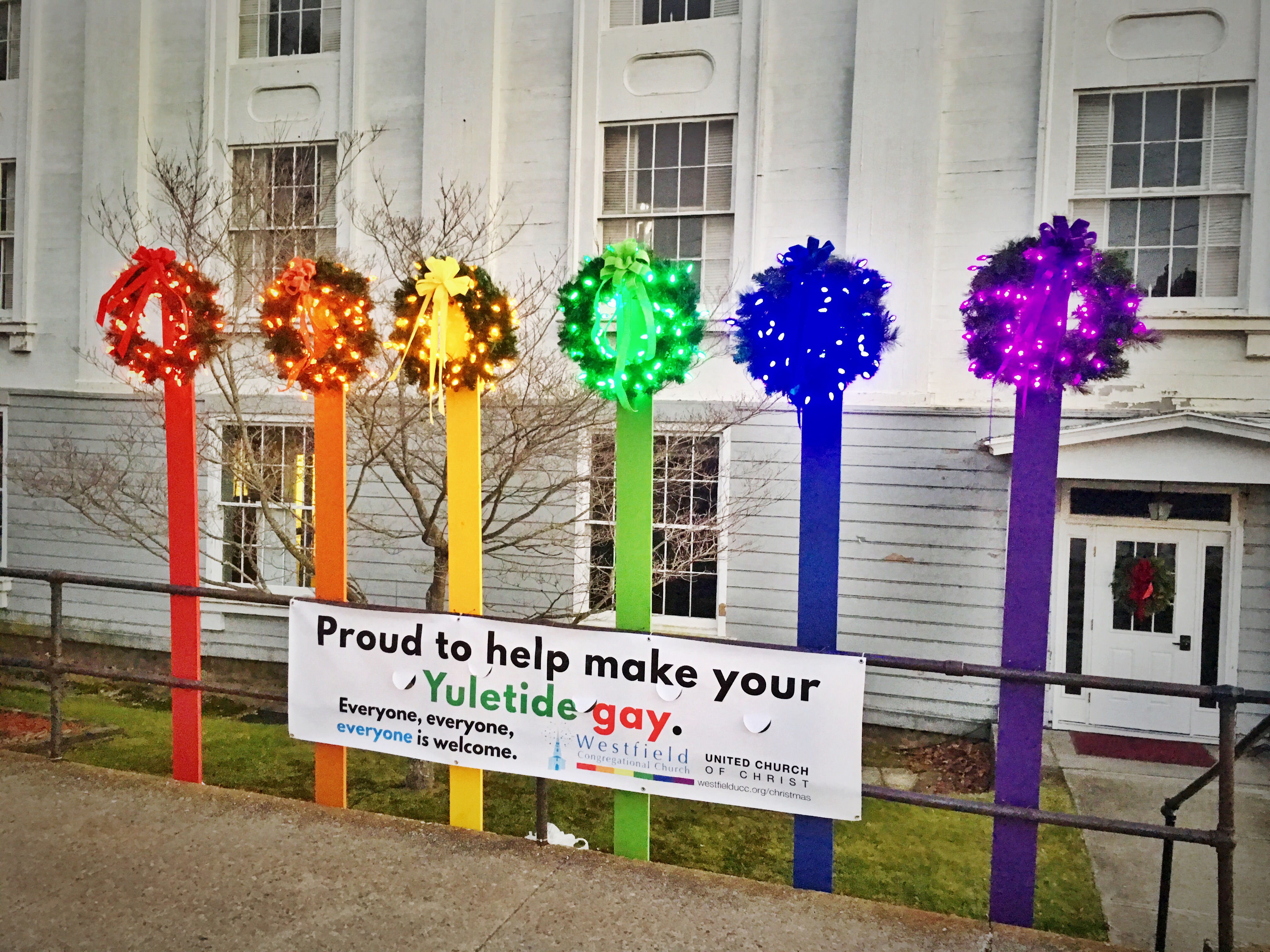 It  looks like redefining Christmas for our little town in Northeastern Connecticut with our Victorian Christmas services that welcome hundreds of worshipers across denominational lines into our sanctuary every Sunday in December through Christmas. Each night, our church is stuffed with people who just want to sing and hear the story of how Light came into the world and how darkness did not overcome it. At the close of everyone of those services, we sing Silent Night. I stand at the front and lead the singing. And every night, after the last verse, I launch the congregation back into verse one again, this time a cappella. I lift my candle high—so does everyone else.  People think it’s all part of the spectacle. The truth is, I do it for me. I do it so I can listen to 350 people sing their hearts out. I do it to bear witness to a church breaking forth from its own tomb, praising God with every word of every verse and every flame on every candle. I do it so people can hear the call of Jesus. I do it so I can hear the call of Jesus.

The first thing I see when I walk into the office and the last thing I look at when I head home is a giant banner celebrating Westfield’s 300th anniversary. We made it for the front of our steeple, but it’s home has been next to my office door ever since those celebrations ended. On the top is a picture of our stately, historic building. On the bottom, is a picture of my church—of the people who stood up and railed, “If only you’d been here,” of a community that hoped things could be different and believed they were worth it, a church that heard the call of Jesus and went about their work of unbinding themselves and everyone they encounter.

But the good news of Jesus Christ is that what was dead can live once more not as it was but as God has created it to be.  Listen for the voice of Jesus that calls to us to live boldly, to live justly, to live hopefully, to live fully, to live freely–a voice calling us to life once more. Thanks be to God!