On Shrieking Myself Awake 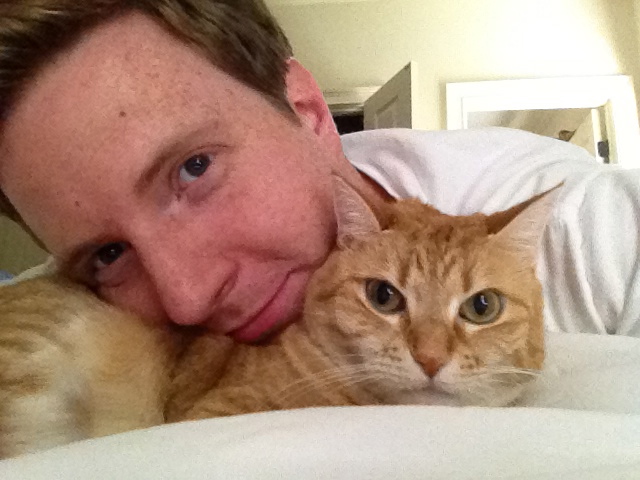 A couple of weeks ago, while my dear G. was visiting, he and I were eating a late supper. In the middle of our meal, we noticed a police car pull into the driveway across the street from my house. A moment later, one pulled into mine. We met the officer at the door, invited him in, and listened to him tell us that there had been two burglaries earlier in the day just up the road from where I live. He told us that the doors had been kicked off their hinges and that it would help if we just kept an eye out for any suspicious activity. We thanked the officer for letting us know (and for making such a visible patrol of the area that night), and sat back to our meal.

Side note–New to the North Lesson #1: I should tell you, dear reader, that one of the biggest differences between where I live now–in a rural area–and where I moved from–a city– is the general lack of outdoor lighting at night.  In the city, light equals safety.  We’re 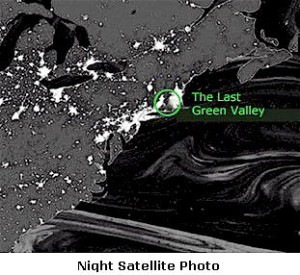 generally wary of dark areas–of the danger that might be lurking there. When I moved to Northeastern Connecticut, I found a region with a different understanding of light at night. People here value the stars in a dark night sky. When I first arrived, I was shown a satellite map of the region at night by a church member. “See this dark strip here,” she said, “that’s where we are!” It’s affectionally called “The Last Green Valley.” And, since it’s relatively safe, most people don’t think twice about it. But for someone who lived the last half-decade in a city, it’s dark. Really dark.  My-alarm-clock-seems-so-bright-from-the-lack-of-other-light-that-it’s-sometimes-hard-to-fall-asleep dark.

New to the North Lesson #2: Another big difference is the way houses are heated here. In Georgia, we use what’s referred to here as “forced air heating.” It kicks on just like the AC in the summertime.  All you really notice is the blower starting and that’s that. Well, my house in the fair North has baseboard heating that creaks and groans and taps in the night. You can hear something loud kick on and the water drain out of the system.  Put plainly–it’s loud.

And paired with dark in the middle of the night, a little more than intimidating. Frankly, scary as hell.

Onward:
About a month ago, I was a having a marathon laundry day.  The washing machine here is a little smaller than I’m used to, so it takes more loads to do laundry when I finally decide it’s time to do my chores. More loads means, more folding stints, and more times putting away freshly dried clothes in my chest of drawers. When I moved here, late, late in September, I decided to artistically caddy-corner my mirror on top  of the bureau. It looked nice, and had been there for upwards of three months. I really hadn’t thought about it for since then.

Imagine my surprise at 4:30 that morning when the mirror toppled over the trendy silver, 2′ tall Christmas tree sitting on top of the drawers, crashing to the floor and shattering–sending shards of cheap mirror all over.  It was terrifying. What was even MORE terrifying was the fact that I’m not convinced that the shattering mirror itself was the thing that woke me up that morning. What did the trick, if my memory serves, were the three, distinct, deep-bellied, falsetto-ridden, schoolgirl screams that fairly accurately expressed my terror in the midst of the situation. Heart racing, I finally figured out what had occurred, settled back down in the security of heated blanket.  Full Disclosure: After I had finished checking the bed for any wet areas, my first thought was, “I bet I can use this in worship.”  See that, Westfield folks–I work ALL the time! Later that day, I was eating supper with my friend Sarah in Providence and a waitress dropped a glass that shattered on the floor. My head snapped around faster than cat running out of a room full of rocking chairs.

All that to say that yesterday evening, my landlord came by to tell me again how much he enjoyed our Victorian Christmases and how he’s been hearing good things around about it and me. Now, my landlord loves a good conversation and is a town selectman; so I thought I’d check with him to see whether there was an update about burglaries from a couple of weeks back. Well that was a mistake. While E . didn’t have any new information, our conversation got the topic in my mind.  And that is just where it stayed. All night. ALL night.

I had gone to bed at my normal time, but knew I was feeling antsy–and since I had to wake up at 4:30 (on purpose this time), I thought I would be kind to myself (hear that Seminary friends–we call that “self-care”) and picked one of my favorite songs to wake me–a live recording of Ray Charles’ Georgia on My Mind.

I spent most the night tossing and turning, wondering if every time the furnace started up I was being burgled, if every time the cat jumped off a counter what I had really heard was a muffled crowbar prying the door open. I woke up, wide-awake, at 2:30 only to spend the next thirty minutes trying to drift back to sleep. Finally, the calm of sleep took over.

And once again, I find myself making this confession: I’m not sure what woke me up Ray Charles or my horror-house shriek.

I wish, dear reader, this was the end of this story. But; unfortunately–for me, at least–it isn’t.

After starting my morning with a…start…I was lying in bed in the middle-of-nowhere dark (which is different from the city-still-a-little-light-from-the street-lamp-dark) waiting for my heart rate to climb out of the stratosphere, when my door slowly began to open.  My mind starting racing. In a matter of seconds, the following things ran through my mind (and please excuse my language–I want this site to be…authentic): 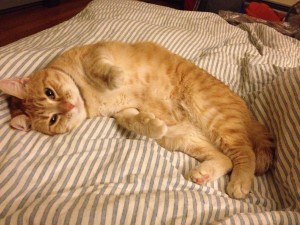 After praying the most I had this week since Sunday service, that last one, number 5, gave me pause. She’s done that before. My cat, like cats generally, is curious.She doesn’t like closed doors and restricted areas.  I slowly glanced over at the bottom of the newly-created gap in the doorway. Nothing. And Nothing.  Should I grab that bat? Should I turn into a Banshee…again? Should I grab that bat, break my way out the window, and leave my sweet cat to her tiger-like survival instincts? Just when I decided sinking deeper under the covers was the ONLY reasonable solution, I saw that sweet face peak around the corner.

I don’t speak cat, but the look on her face was pretty obvious. “Quit shrieking and feed me!” Now that, I could handle.

So tonight, if you hear some shrieking, even down in Georgia, drop me a text, tell me to knock it off and remind me to feed the cat.