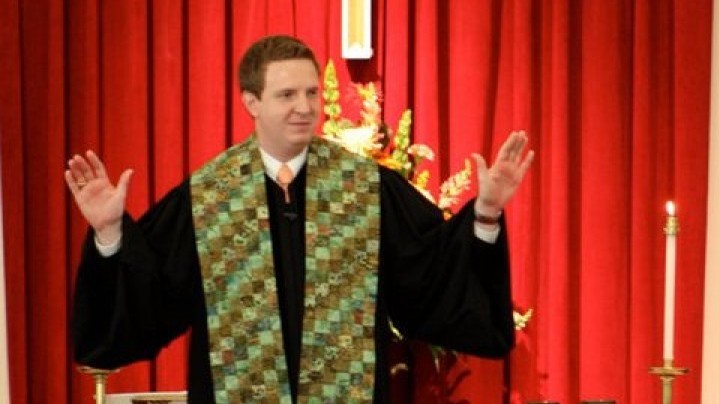 This sermon was preached at Westfield on October 14, 2012. Before you read it, check out the Gospel Lesson it’s based on.

It’s also a story that tends to make us more than a little uncomfortable. This particular section of verses is a section that is sorely tempting to soften.  Starting even in the 9th century, there is a sole commentary that, in an effort to soften this passage, speaks of a smaller gate within a larger gate to Jerusalem that was used for the daily comings and goings of the people living there.  This commentary informs us that the smaller gate, known as ‘the eye of the needle’ was big enough for humans, but camels, often with goods hanging from their sides and stacked on their backs, would have to put their burdens down in order to fit through the gate.

While this is certainly an explanation that makes this passage a little easier to swallow and the metaphor of letting go of that which weighs us down is helpful, the reality is that there is little evidence such a gate ever existed.  Truthfully, such notions are little more than an effort to make this hard story less intimidating. It’s easy to try to explain away Jesus’ words as part of his cultural context. It’s much harder to deal plainly with Jesus’ words.

In order for us to do that–to deal plainly with Jesus’ words–there are a few things we need to get straight. The first is that this story shows up in all three synoptic gospels, Matthew, Mark and Luke. Each time it shows up in a slightly different form.  Scholars refer to this story as that of “the rich, young ruler.” As it turns out, Mark tells us he’s rich; Matthew informs us he is young, while Luke adds that he is a ruler.

The second is the overall tone of this story. Often, we hear this story told in a way that suggests Jesus was angry or indignant or that he reprimanded the man.  The text, however, presents a different tale.

We are told that this man ran up to kneel before Jesus. Immediately, we find this man carries a deep respect for Jesus as a teacher. His submission and words “Good teacher” indicate at least that much. Then he asks Jesus the million dollar question:  “What must I do to inherit eternal life?”

After a brief lesson on the nature of God, Jesus outlines to him the Jewish rubric for religious success–the commandments. The ruler affirms that he has “kept all these since [his] youth.” The commandments were more than a list of rules. It was understood that following the commandments would not only make your life livable, it would bless you. This is certainly the implication with the rich, young ruler–he followed the rules, and in the eyes of society, he has been blessed.

Then, we are told, Jesus, looking at him, loved him. These are the words that so often get passed by in this story.  Jesus isn’t trying to make this man’s life harder; he isn’t playing him like a pawn in some cosmic game of chess. Here we find the same language and emotion each time Jesus heals someone in Mark’s gospel.  In fact, each time someone approaches Jesus by kneeling in Mark, it is to request healing. If we look at the story this way, Jesus’ next words shift from being a nearly impossible demand to being a radical prescription for a deep-seated illness or need.

Jesus really looked at him, and saw him for who he was–a beloved child of God who was hurting, who was looking for something more to life. And that is when Jesus tells him “You lack one thing; go, sell what you own, and give the money to the poor, and you will have treasure in heaven; then come, follow me.”

The man had what I would call a natural, human response. Mark tells us “when he heard this, hew as shocked and went away grieving, for he had many possessions.” Just in case he wasn’t clear enough to the man or those gathered around him were curious as to exactly what Jesus meant, he re-iterates his point: “How hard it will be for those who have wealth to enter the kingdom of God!” Just to be sure they get the point, he tells them another way: “Children, how hard it is to enter the kingdom of God!”

Wow.  Jesus makes no bones about it, does he? These were hard words for those around.  In first century Judaism, much like our society today, wealth was interpreted as God’s blessing. Jesus’ words that the rich would have a hard time entering the kingdom of God are contrary to nearly every notion of God, wealth, and life that people had.

Words like this are a perfect example of what the author of Hebrews tells us today: “the word of God is living and active, sharper than any two-edged sword, piercing until it divides soul from spirit, joints from marrow.” It’s scriptures like the story of the rich, young ruler that we would rather forget because, at the end of the day, there’s no easy way around this–it’s a story that pierces us to the core.

It’s also important to point out that Jesus doesn’t simply tell him to sell his things. Jesus is specific: Sell what you own and give the money to the poor. Implied here is the importance of sharing in the hardships of life with each other, including the poor.

All in all, we’re left with a pretty tall order, one that even the people who heard it were stunned by. Feeling what I suspect was pretty hopeless, they said to one another, “then who can be saved?” A legitimate question, I suppose. Then who can be saved?

Who can be saved?  Jesus offers us some comfort: “For mortals it is impossible, but not for God; for God all things are possible.”

Indeed, for God all things are possible and while that knowledge brings relief, it doesn’t release us from the demands Jesus places on our lives if we are to go and follow him. And only him.

I knew a man from my last church who often wanted to discuss scripture, namely scriptures that dealt with money. During one of our last conversations, he got fairly worked up. “Why do people keep telling me that money is evil! Am I a bad person because I have money? I worked hard and saved harder!”

Let’s me clear–money, in and of itself, is not the problem. The problem is when money, wealth, or anything for that matter becomes more important to us than God. God wants to be at the center of our lives, and friends it is so, so easy to let other things become that center. For the rich, young ruler it was wealth.  And for us, it could be money–having it, the pursuit of it. But it could also be our obsession with the lack of it. Or it could be our work, or our health. I have friends who could be defined as quintessential health nuts–they’re at the gym all the time, are obsessed with eating healthy and making the best choices for their body. You can hardly fault them for caring, but eventually, their bodies, like our, will become ill. If health has been at the center of your life, what happens when that center is gone?  God wants to be that center. The issue isn’t about making right choices, it’s about what takes the highest priority in your life, and here, Jesus lays out what it takes to make God that priority.

Essentially what we are talking about is idolatry. And rather than telling this man to fight wealth’s temptation, he instructs him to get rid of it all together.

Jesus had, a chapter or so ago, turned toward Jerusalem, toward the cross. And because Jesus is headed toward Jerusalem (and all that entails), we find his teachings, healings, and miracles picking up pace and his demands become increasingly, well, demanding.  Gone is the early simplicity of his ministry…”your faith has made you well.”  Those teachings are as valid as they always were, but today we hear Jesus adding to what it means to follow him, namely–Sacrifice. You see, while Jesus’ demand of the man may seem extreme to us, it’s certainly no less than the demand he places on himself, giving not just his wealth but his very life for the world, including this rich man.

At the foundation of this story is the theme that runs through all the Gospels. Jesus came to this world in human form to show us a better way to live.  Time and again, he points out the ways that we become slaves to things we hold (which, truthfully, are the things that hold us) and encourages us to let them go. And time and again, we fail.  But friends, hear the good news.  What is impossible for us, is possible for God.

“We’ve seen this before in Mark’s gospel. In the parable Jesus tells, seed scattered creates a miraculous harvest in good soil; and in the stories that follow it, the dead are raised, the barren can conceive, storms are stilled and demoniacs are set free. People can’t do these things. God can, and God does.

From one angle, the point is that wealth is every bit the impediment to fullness of life in God’s kingdom as illness, deadly storms, death, and demon possession/mental illness are to fullness of life on earth. Wealth can be just that dangerous. It can derange us that much. But God can deliver us even from its incredible power over us so that it no longer controls us and gladly share it, and even go out of our way to look for new ways to share it, however much or little we have, with all who can use it.

It was that very thing Jesus offered the rich man that day — God’s salvation from the power of wealth.”

This is what God is offering you today, this day, this hour, this minute and every day, hour, and minute of your life: salvation from the power of wealth, grace in the midst of shortcomings, love in the middle of loneliness, hope in the face of despair, and the promise that no matter who you are: rich, poor, single, married, old, young, democrat, republican–you have been invited to be part of God’s kingdom, to put God at the center of your life, through grace–a grace that’s free, and yet will cost  your life, a grace that is God’s gift to you, a grace that is, ultimately, for everyone, everyone, everyone.

So friends, as the author of Hebrews encourages us, “Let us approach the throne of grace with boldness, so that we may receive mercy and find grace to help in time of need.”

In the name of the Father, the Son, and the Holy Spirit. Amen.