The One about Harry Potter, Jesus, and Temptation 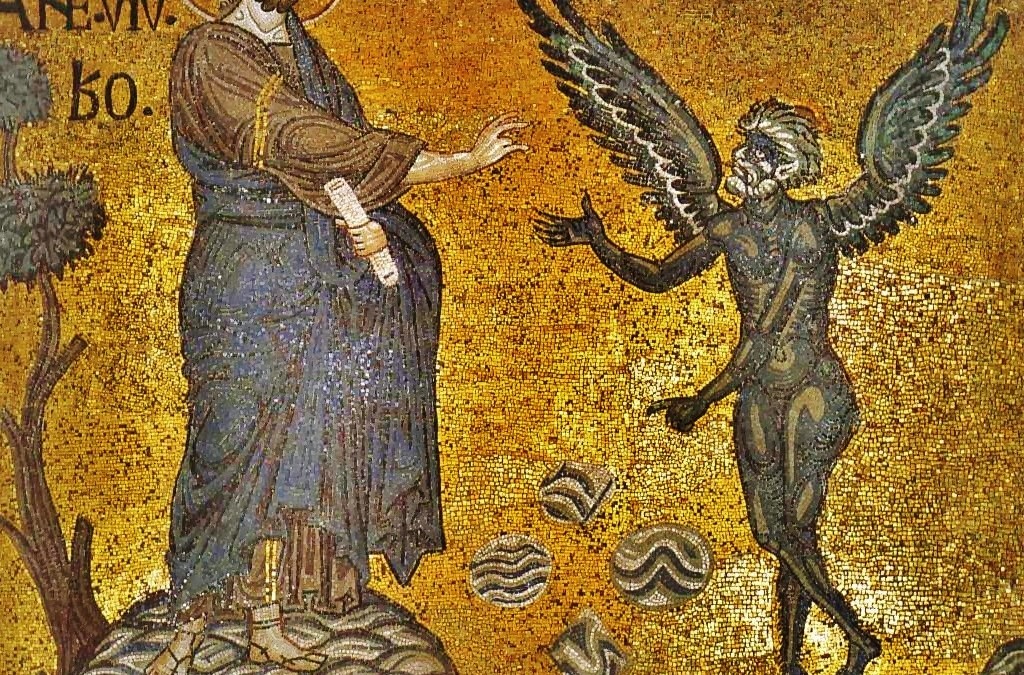 Since Lent is a season of repentance and the first step in repenting is confessing—admitting that we’ve screwed up, I have a confession to make. During the second week of the New Year, I watched every Harry Potter movie—all eight of them. That’s just what you’d expect of a thirty year old, isn’t it?

For those of you unfamiliar with the Harry Potter books, they’re about this boy wizard who had no idea he was a wizard and his time a Hogwarts School for Witchcraft and Wizardry. The books start off relatively innocently: the first and second books, while action-packed, are really coming of age tales with magic at its core. They explore Harry’s self-discovery as he figures out just what it means to be Harry Potter.

But then starting with book three, things get progressively darker. There’s darkness in the world, and it’s gaining strength. And that darkness is threatening everything that witches and wizards and us muggles hold dear. Now, I think it’d be easy for us to write the series off as just fantasy, but it seems to me that there’s darkness in this world. And it seems like it’s growing stronger day by day.

Back to the world of Harry Potter.  Throughout the books, Harry is gifted with or comes across lots of magical help. And most of the time he doesn’t realize what he’s got his hands on until much later. Does that sound familiar? That we get help or someone walks into our lives and we don’t grasp just what that means until much later? In the first book, he’s given a cloak of invisibility that makes whatever its wrapped around invisible. Later, it’s revealed that Dumbledore’s wand is the famous Elder Wand—the most powerful in all the wizarding world. And finally, there’s the Resurrection Stone—a stone that brings whoever is holding it back to life should they die. Together, these three items are known as the Deathly Hallows, and whoever owns all three is known as the Master of Death.

Harry didn’t know what he had his hands on at first, but as it became clear to him, he had two choices: to fall prey to the remarkable power at his fingertips (for what would turn out to be a high, high price) OR to realize the good the Hallows could do when used unselfishly.

When Jesus was driven by the Spirit into the wilderness, he faced a similar internal struggle. Jesus had just been baptized. You remember how that went, right? Jesus finds John in the middle of a fiery speech about how one greater than he is coming. And at that moment John sees Jesus and essentially begs Jesus to baptize him, but Jesus refuses, insisting instead that John baptize him! And as Jesus comes up from the waters of the Jordan River, the sky parts and spirit comes down like a dove and a voice proclaims, “This is my Son, with whom I’m well pleased.”

And then, according to Luke 4, the Spirit leads Jesus into the wilderness. And while he’s there, while he’s out roaming in the wilderness, the Tempter comes and gives it his best shot. Now Jesus has got everything he needs at his command—heaven and earth will bow before him at his command. He’s got a Divine mandate. Still, he’s driven into the wilderness, no doubt wondering what the dove and John and the baptism all mean, what it means to be the Son of God. He must’ve asked the same question we all have: who am I?

In the 1940s, Florence and Clarence Jordan along with Martin and Mabel England founded Koinonia Farm in Americus, Georgia. In Greek, Koinonia means communion or fellowship, the kind that’s found Acts 2:42 where we find references to the earliest Christian community. The unique thing about Koinonia was that they, in the Deep South and in an era deep in segregation, were fundamentally committed to the equality of all people, rejected violence and shared common ownership of their possessions. You know the word “countercultural”? Koinonia was and continues to be “countercultural.”  Perhaps the most well-known outgrowth of their community is an organization we’ve all heard of and I suspect many of us have volunteered with: Habitat for Humanity.

There are lots of stories about Koinonia Farms, about their commitment to justice or the bombings they endured because of it among others. But one of their founders, Clarence Jordan, has another claim to fame. Jordan was a greek scholar having earned at Ph.D in Greek New Testament, and in the 1960s, it was clear to him that the changes the  country were going through were significant ones. He felt these historic scriptures needed context for people to be able to understand them in the midst of the very modern challenges the country was facing, so he created a series of homespun translations of New Testament writings called Cotton Patch Gospel.

All the places that seemed so far away–both geographically and temporally, were suddenly close at home. Rome became Washington, D.C., Judea was Georgia, Jerusalem-Atlanta, and so on. In Jordan’s version, Jesus wasn’t crucified, he was lynched because, according to Jordan, no other term adequately conveyed the sense of the event into a modern American understanding.

Here’s how Jordan recounts Jesus’ forty days in the wilderness. This is on the insert you’ve got in your bulletin next to the version we heard this morning:

So, on fire for God, Jesus returned from his baptism. Then in this spirit he was moved to go into the back woods for forty days, where the Confuser took some cracks t him. During that time he didn’t eat anything, so he was hungry when the time was up. Then the Confuser said to him, “So you’re God’s man, huh? Well, then, tell this rock to become a pone of bread.” Jesus answered back, “A man can’t live on bread alone.”

The the Confuser took him up and showed him, in the twinkling of an eye, all the countries of the civilized world. “And he said, “Look here, all this power and glory has been turned over to me, and to anybody I want to share it with. Now if you’ll just let me be boss, I’ll put you in charge and turn everything over to you.”

Jesus shot back, “The scripture says, ‘You shall let the Lord your God be your boss, and you shall give your loyalty to him alone.’”

The Confuser then brought him into Atlanta, and put him on the steeple of First Church, and said, “Okay, you’re God’s man. Now jump down from here, because you know the scripture says, ‘He will give orders to his angels to keep close watch on you,’ and also, ‘They’ll carry you along on their hands to keep you from stumping your toe on a rock.’”

Jesus told him straight, “It also says, ‘Don’t make a fool out of the Lord your God.”

So when the Confuser God through giving him the works, he left him for a while.

My favorite part of Jordan’s version is what he calls the devil. Did you notice what he calls him? The Confuser. To me, that makes the story of Jesus’ temptation so much more relatable because what’s more dangerous in the conversation about “temptation” is not necessarily the temptation.

Let me explain.I don’t know about you, but when I’m staring temptation in the face, it’s relatively easy for me avoid it. I have a clear sense of right and wrong, and sticking to my guns on that is pretty easy. Let’s put it in terms of food: If there’s an apple and a cake side-by-side, it’s obvious which one is the healthy option. But if there’s a cake or, say, an apple pie—it’s much harder for me to not choose either of them. “Well, the pie as fruit in it—which are basically vegetables…” Have you ever started down that road? “Well, cake does have a lot of sugar, but it also has eggs—and I’m a little low on my protein intake for the day—so it wouldn’t be awful if I ate the cake…” You know what I’m talking about. Don’t lie.

Temptation is often cloaked in confusion or rationalization. And that’s where we fall down. Can’t you hear the Confuser saying to Jesus “It’s just some bread. They’re only rocks—there’s a desert full of them. Nobody’ll miss ‘em, and you’re so hungry.”

And you know, Jesus could’ve done it. And I bet many of us would’ve if we were him. “No one will care,” the Confuser whispers. “No one cares about anything you do. You’re not important enough. Don’t worry about it.” The Confuser’s lies feed into the lies we’ve told ourselves time and again—lies we’ve been told time and again: that we are so insignificant that we aren’t worth anyone’s best—that no one will notice how we treat ourselves or each other. And so, who cares if we fall prey to temptation. What does it matter?

It’s hard to imagine Jesus being self-conscious about his call or his identity. But even the night before he was crucified, he pled with God in the Garden, didn’t he? “If there’s any way to take this cup from me, do it.”

So the question for us is, when we’re tempted or confused, how will we choose to respond? When we’ve got all the power in a situation—when we could make the tide turn any way we wanted, when we’ve got all the Deathly Hallows in our possession—what is it we will do? Will we allow ourselves to become confounded by the Confuser’s lies, unsure of our worth and value in God’s eyes? Or will we boldly stand and proclaim what we know to be true: we are beloved children of God.  We are exactly who God created us to be. God loves us because of who God is—not because of anything we did or didn’t do.

Friends, I hope that in the days ahead, when you find yourself questioning whether or not you’re good enough, whether or not you can handle what’s being thrown at you, that you’ll remember who you are in God’s eyes. And I hope that, in the days ahead, when you stare into the Tempter’s eyes, listening to every argument he’s got, that you’ll remember you’ve already got everything you’ll ever need. How do I know that? Because I believe you are a beloved child of God. I believe that you are exactly who God created you to be. Because I believe that God loves you because of who God is, not because of anything you did or didn’t do.

As we begin this Lenten season, carry those truths deep in your heart—knowing starting with our baptisms and into the wilderness—even to the cross—God is with us always. Amen.