The Other Half of Christmas 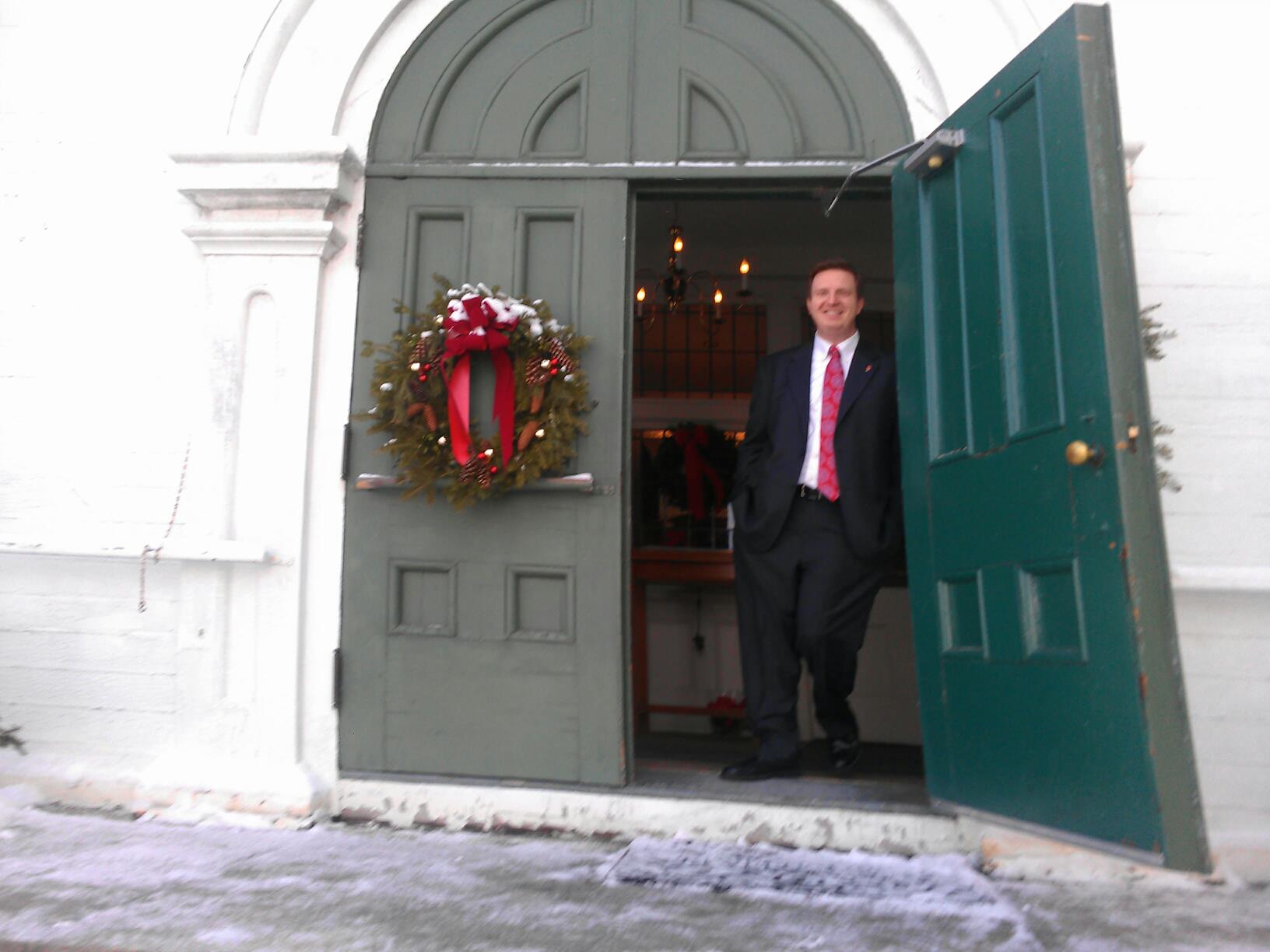 This morning is the first time I addressed the tragedy in Newtown directly in a sermon. In order to do so, I used the Lectionary from Year C for the First Sunday after Christmas known in Biblical circles as the Slaughter of the Innocents–a fitting scripture when talking about such sad affairs. Here’s the lesson for the day.

The holidays are a time of traditions. From watching Santa arrive at the Macy’s Thanksgiving Day Parade to favorite Christmas dishes, traditions define our time together during Christmas. One of my family’s traditions is to read the Nativity story on Christmas eve. We read it from the same old family Bible that’s been passed down from generation to generation. My dad turns to Luke, and in a quiet voice begins to read one of the most iconic stories of our faith. It’s a tradition that Greg and I have picked up.  Once we made it back from the airport Wednesday afternoon and finished wrapping presents, we sat and read the story that has been so loved by generations of Christians.

We didn’t read this part, though. We rarely read about this. Partly, that’s because in Luke the next scene we are offered is Jesus’ circumcision then, bam, he’s teaching in the temple. In fact, if we were following the lectionary to a “t,” we’d be reading that passage today–the story of Jesus schooling the temple leaders. Luke also offers a much tidier ending to the birth narrative. “But Mary treasured all these words and pondered them in her heart.” That’s nice.

Matthew is hardly as neat. Matthew presents a more frantic story; and while we like to read the birth narrative reverently and calmly, there are some pretty anxious moments in Matthew’s version of events. We all know the first part: Mary finds out (by way of an Angel, mind you) that’s she’s pregnant even though she has done nothing that might make her with child. Joseph is visited in a dream by an angel encouraging him to stay with his wife who is expecting a baby that isn’t his. The baby is born in a cowshed out back behind an inn as a star rises above that is brighter and bigger than any other star that night. Shepherds somehow make their way to see the newborn child. So do wise men who bring a wealth of gifts. and For an instant, there is a Kodak moment of Christmas perfection.

Then things get even crazier, according to Matthew. Joseph gets this intense dream where an angel says “Hey, listen up Joe, get the kid and haul it to Egypt. Herod’s out to get him.” And Joseph does as he’s told and uproots his family for Egypt (the land that enslaved his people generations before—just so we’re clear). And, with the holy family safely stowed in a far off land, Herod proceeds to kill all the boys under the age of two in the region around Bethlehem in an attempt to thwart any sort of revolutionary child king. And Rachel weeps for her children. Jesus is saved.

This is the other half of the story, the other half of Christmas. And it’s a hard half to confront, particularly now as we read it through eyes that witnessed the endless news reports of the horror and tragedy that happened just 2 and a half short weeks ago in Newtown. It’s taken me a while to make it to a place where I felt like I could preach a sermon about that. Many of my colleagues responded that first Sunday after the tragedy with sermons about what had taken place. But it just felt like it was too soon for me, for us.

That Sunday we had no fewer that 15 congregants in attendance who worked in schools in one way or another–that’s not to mention the many who volunteer or who are parents.  We needed to be gentle in our response, intentional in our healing.  That Sunday I told you that we needed to hear the stories and songs of our brokenness and of our salvation. Today, the same remains true: this is a story of humanity’s brokenness

The first time I preached on this text was while I was in seminary. I remember reading the text closely and realizing just what a challenge lay before me. There I was: twenty-two and barely a semester into my theological education and I was being asked to discuss quite possibly one of the most theologically challenging passages in the Bible. It’s challenging because it forces us to fundamentally wonder about the nature of a God that would allow the death of children for the sake of his own. It makes us question the notion of a savior that would run while not warning others to flee as well, or of a God that wouldn’t make that part of the plan.

And beyond the little changes have been much larger ones. Twice a week, I donned my security ID and made my rounds on Four East at Scottish Rite Children’s Hospital in Atlanta. Rarely were there patients that had been there for more than a few days. So my time was spent making initial visits to patients and families, and attempting to assist them in some way. Mostly, after I went into a room and introduce myself as a chaplain (talk about wondering if you’re old enough…), the families would politely answer a few questions then indirectly or, sometimes painfully directly, let me know it’s time to go. But every once and while, someone opened up. A young parent wants to know why this is happening to their child? If it was something they did? They want to know why bad things happen, or why God lets the innocent become ill. And I would stand in those rooms, with these people bearing their souls to me and I want to say “You know I’m twenty-two, in my first semester of seminary and barely making a B in Hebrew, right?”

That question was quickly followed by two more questions: “Wait, your serious?” and “Where do we go from here?”

But that isn’t their concern. Their concern was finding a way to get through the ordeal they are facing, and they wanted me to help them.

I think Mary and Joseph might have felt the same way. I can imagine Joseph thinking “Am I old enough to be taking my family to Egypt?” Mary might wonder “am I old enough to be a mother?” We all question our own preparedness in the world around us. Somehow, I don’t think you ever feel old enough. Joseph could’ve just as well asked the angel “Wait, your serious?” You can almost hear Mary look at her husband: “Where do we go from here?”

These are the questions that linger in our minds now, over two weeks after the tragic Sandy Hook Shootings. I think we all remember when we first heard about it–the conflicting reports, our inherent disbelief–no, this can’t be–who would do something like this? We stared at the at the TV–”wait, your serious?”

But hear there is good news in this story–it is the the Good News of God’s faithfulness. This, the other half of Christmas, is the promise coming to life. Until this point, the story has been grand—angels and singing, shepherds, magi and gifts. The promise is said to have been fulfilled.

But if we journey with the story as though it is the first time we’ve heard it, we don’t know that yet. We don’t know about Lazarus coming back to life or the sick being made well. We haven’t gotten to the part where Christ walks on water or feeds a hillside of hungry followers.

We just have a manger, a new mother and father, a small child and an angry king. The flight to Egypt and the mere survival of Christ, then, is a morsel of promise made real in an otherwise fairy-tale of a story.

And in this morsel of survival is a world of truth and hope and certainty in the midst of the most uncertain times much like the ones we live in now. But friends, God is faithful.

Like Rachel we weep for the brokenness of this world. We cry out when it seems that good has been slaughtered by evil. We tremble when we witness the destruction of war and famine and drought. But friends, God is faithful.

I think about my patient Bobby. The four-year old had been admitted to the hospital with an abdominal wound which came from his brother who stabbed him (accidentally) with a box cutter while playing power rangers. I sat with Bobby for 3 hours or so, playing candy land, watching power rangers, and talking about what he wanted for Christmas. He knew he was being released later that day, so he talked about home, and how he was ready to “get out of this town.” What he didn’t know was that the Department of Family and Children Services would be picking him up. He would be leaving the hospital, but he wouldn’t be going home.

And I wept for Bobby as I left that day. I felt like I had abandoned him like everyone else had in his life. I was angry at a society that would let a child be harmed like he was. I was angry at the God that didn’t protect him. It didn’t seem to me that God was faithful at all.

Don’t you see, this is the other half of Christmas—It’s a bit of reality in an otherwise fairytale experience. And in the midst of that harsh truth, there is the light of the fact that the Christ lived through trying times, and suffered with us so we might be able to survive this world. God remained faithful through his own humanity to offer us salvation.

This is the joy of the other half of Christmas—we can make it. God is indeed with us, because as the author of Hebrews reminds us, Christ has suffered along side us. And for this reason Jesus is not ashamed to call us brothers and sisters.

The Nativity isn’t just a pleasant little tale that weaves a story around angels and sheep.

It is a promise made real. For, friends, God is indeed faithful.