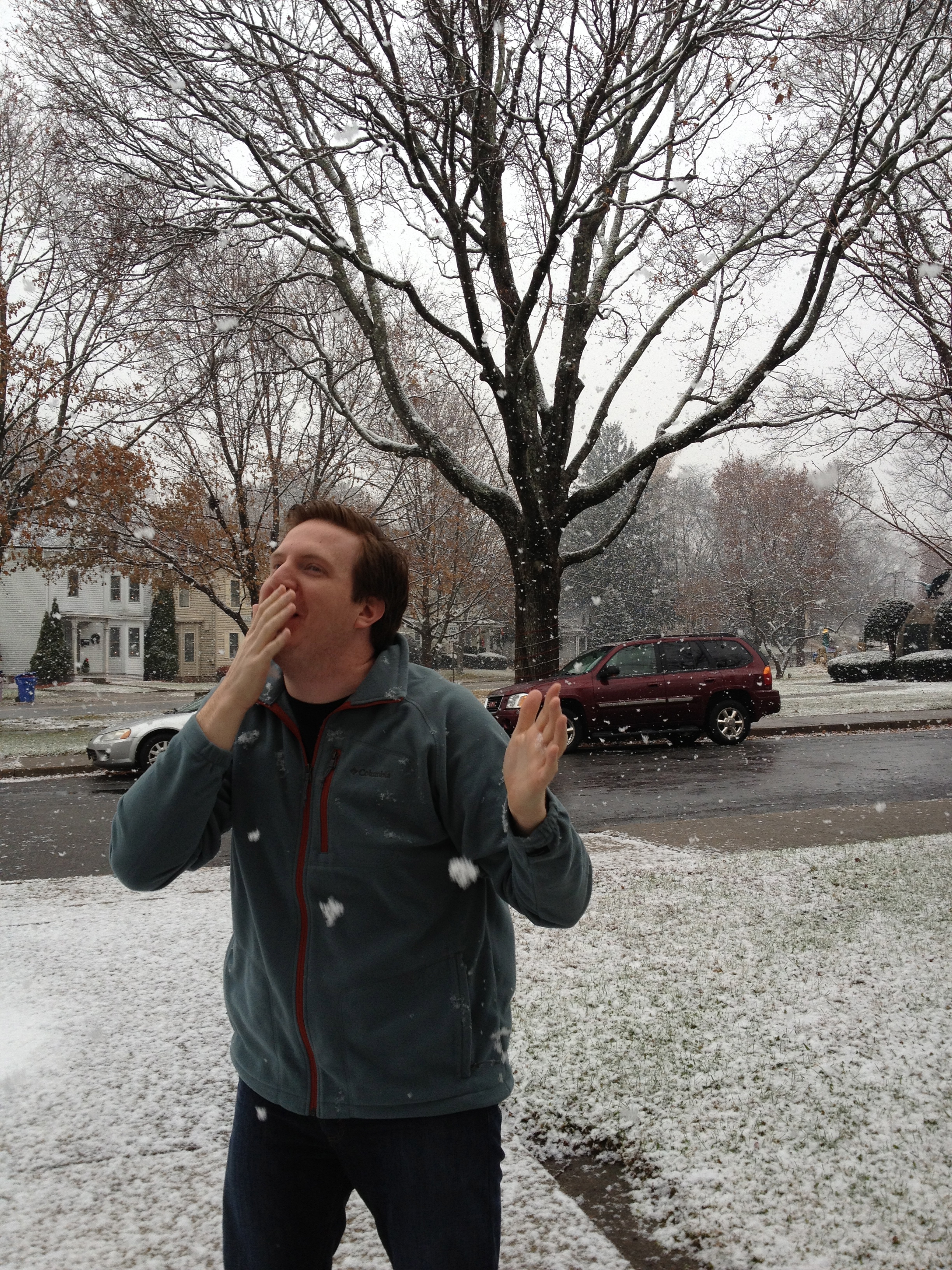 Friends, what you’ve heard is true–Southerners do not know what to do with snow. Put simply, snow is magical. It’s rare. It’s quiet.

It’s also terrifying. Ice, slick roads, no power.  I know it’s hard to remember what winter is like during the balmy month of August, so let’s watch a little reminder.

You only need to watch through minute 2:50.  But the rest is pretty great too.

As we’ve been reminded, winters tend to bring out the grumpier side of us Southerners, the selfish side. At the first threat of winter weather, what do we do? We run to the nearest grocery store and grab all the milk and bread we can find. If there’s no more bread and milk, we’ll settle for crackers and coke–as long as we’ve got rations, we’re alright.

There is no denying it, this is a hard text. If we were reading through Mark, we would have just come off a few chapters of fun miracles–the feeding of the 5,000, Jesus walking on water, and so on. We’ve witnessed Jesus’ ability to care for people in really pragmatic ways (I mean, he fed people, lots of people–lots of fish and bread) and we’ve heard about his desire to strengthen their faith.

We’re familiar with this Jesus. We’re used to him—this Jesus who helps, heals, cares for. The Jesus who feeds people, who cast out demons and healed broken bodies and  brought children back to life.

But here, in this story, we stumble on another Jesus. One that, if we are honest with the text, is a hard Jesus to deal with.  The Jesus we know wouldn’t turn people away. But here, in Mark 7, we see Jesus tell this syro-phoenician woman—a gentile–that he won’t heal her daughter because she isn’t a Jew.

The story has Jesus roaming around the northern coastal plain, near Tyre in what is modern-day pLebanon.  Trying not to be noticed, he ducks into a house. Yet it seems, word is already spreading about his arrival.   A woman, whose daughter has an unclean spirit, falls at his feet.

This is the familiar part, the scenario that we see played out again and again in Mark.  Jesus is walking, doesn’t want to be noticed, tries to keep a low profile, but, despite what seem like his best efforts, those who need help find Jesus anyway.

But, we find out, this isn’t just any woman.

The text tells us that this is a Gentile woman, of the syrophoenician race.  This certainly wasn’t a surprise to Jesus.  He knew where he was, and what kind of people lived there.  Tyre was near the border of the land of Israel. It was no secret that Gentiles lived over its northern border, nor that Jews of that time were living in a Gentile world.

This mother who shouldn’t be even talking to Jesus because she isn’t a Jew, much less asking for anything because she is a woman, approaches Jesus and asks him multiple times to heal her daughter. In the Matthean version of the story, there is a little more interaction here. She pleads with Jesus, and he doesn’t deny her just once, he denies her twice.  In the Markan scene, we are told that “she kept asking Him to cast the demon out of her daughter.”

In either case, the response Jesus gives is surprising to say the least. “Let the children be fed first, for it is not fair to take the children’s food and throw it to the dogs.”

Mark’s version is a little kinder than Matthew. Matthew recounts Jesus’ reply as “It is not fair to take the children’s food and throw it to the dogs.” Did you catch the difference? Mark’s Jesus declares the children should be fed first. If someone is fed first, that means someone else is fed next.  Matthew’s Jesus doesn’t take it that far.

In any case, it is probably safe to assume we aren’t talking about our family pet here. This isn’t a compliment. In fact, I’d say its mean.

Still, the mother doesn’t give up. She responds: Yes, Lord. But even the dogs eat the crumbs that fall from their master’s tables. This is the record screeching, drink-spraying, conversation-freezing moment. I can imagine one of the disciples, say Matthew, leaning over to John.  “Did she just say what I think she said?”

And with this response, Jesus seems to do an amazing thing—he changes his mind.  He tells the woman “For saying that, you may go—the demon has left your daughter.”

This one woman’s faith in the crumbs healed her daughter.

What’s interesting about Jesus’ last words to this woman is that they don’t match the model.  We’ve heard Jesus time and again through the gospels say ‘your faith has made you well.”  But here, he is hardly as explicit.

Instead, he cites her response as the thing that saved her daughter, not her faith explicitly.  Yet, it seems to me, it was her faith that inspired her to go after the crumbs.

That is where the gospel is in this story—in the crumbs, crumbs that have the ability to change people’s minds—even Jesus’.

But, here’s the thing about food—people like to hoard it, even the crumbs.  Sometimes I hear these hoarders referred to as “half-way Christians”—folks who are so concerned about what THEIR gospel says to THEIR community, that when it’s time to share it  with the world beyond, they fall short.

You know the people I’m talking about. They claim to believe in Christ, then push people away from Him.

Or they say they care about God’s creation: “I recycle!” But recycling only happens when it is convenient. You want to shout that Christianity isn’t convenient.

Better yet, they are the people who watch the church clock. “What do you mean we have to sing all six verses?,” they wonder aloud.  “We are supposed to be out of here at noon! We have to beat the Baptists to lunch…” That’s what the concern would be at home, at least.

Or those who grieve for the homeless population’s reality, but when begged for a dollar, refuse to give it. “They’ll just buy drugs or alcohol,” the half-way Christian argues.

What about the people who sing of God’s love for everyone, but really can’t stand that black kid who came to church today wearing a baseball hat and low riding pants?

Or those who squabble about the details–about who God loves more or who sins less or who got it first or who hasn’t ever gotten it.

And here’s the worst part is: I’m one of them. And, I suspect, at one point or another, you’ve  had a moment of being one too.

But hear the good news of this story: Jesus. Changed. His. Mind.   And we can too.

We can fling our arms wider to those who are desperate for crumbs of hope, peace, belonging, faith, love, all of those identifiers of the Christian faith. We can call people to us, look them in their eyes and see Christ whether or not we are the same color or the same gender or the same sexual orientation.  In changing his mind, Jesus threw out the old, rigid traditions that separated people from one another and from God. He changed his mind, and healed her anyway.

Sometimes, however, we aren’t the ones with the minds to change.  Sometimes, we are the ones frantic for the crumbs, for little bits of sustenance for the journey. Can you think of times that you were desperate for crumbs? I can.

The cold of Copenhagen was unrelenting. I had been there for 3 months, since January, and was beginning to think that winter would never end.  I was an ocean away from home, my birthday was quickly approaching, and I had never felt so alone in my life. My time was consumed with study and reading and sleeping—hardly an adventure.

I was riding my bicycle home from school late one night when I passed the cathedral—the Church of Our Lady.  I had been in it before.  It’s a huge church, one that glows with white marble and the clean lines of Scandinavian design.

As I rode by, I noticed the church doors were open. So, I stopped, locked my bike and timidly walked in.  All around the church were candles and silence.  Every ten minutes or so, a prayer or psalm was sung to mark the passing of time.  After a long quiet, a priest emerged from the front with bread and wine, and those there moved toward the altar.

Danes, like most Europeans, are not very religious.  They seem to have gotten it out of there system, but the small gathered community here seemed to pay no attention to the cultural mores of the day. They gathered in a semi-circle around the altar in the front of the church.  Desperate for my own crumbs, I joined them.

The liturgy began. In Danish.  But amazingly, I knew everything that was happening.  These words spoken for millennia united us in Christ that night.  The bread began to make its way around.  To my right, a woman said offered it to me in Danish.  I took it and offered it to the man to my left, in English.  The cup was passed in the same way.  We fed each other, sustained each other.  And, if I’m honest, they gave me the crumbs, literally and figuratively, that I’d been craving all along.

You see, we’re all searching for crumbs from the table and we all hold bread for others.  Christ challenges us to change our minds—to open them to those who we’ve shunned away from the table, and for us to acknowledge when we’re desperate to be fed ourselves. Think of how the crumbs sustain us, then imagine how the feast will feed us all.

Friends, here is your invitation to the feast: Share the meal, the bread of life. To eat with us around this table, at fourth Sunday luncheons, on Wednesday Nights–whenever there is a meal served here. There are platters and pitchers, plates and bowls, and yes, even crumbs.

Christ has invited all of you, each of you to feast at this banquet.

So let’s feed one another and let’s feed the world. Even if we start with crumbs.