Wreaths and Wise Men (and telling the truth, faithfully)

This year, I’m going to work on getting back in the habit of posting. In my mind, it can feel like a chore–finding something new to write. But then it struck me a month or two ago that I write new content every week for my congregation. So here it is: this Sunday’s sermon! (Side note: I’m sitting in Detroit’s airport on my way to Phoenix for continuing education throwing this together. Forgive any typos!)

Read the scripture for the week here.

Happy New Year! It’s so good to see you here in this new year. Today’s a big day. It’s our first Sunday together in the New Year. I love this Sunday. I love this season–the beginning of something new.  It always feels like a clean slate.

Today, we’re celebrating Epiphany.  Every year, Epiphany falls on January 6—twelve days after Christmas (cue the single most irritating Christmas song of ALL TIME).  And since that’s a Thursday this year, we’re celebrating it today! Epiphany is the end of the Christmas season, so don’t fret if you’re Christmas decorations aren’t down yet—they don’t have to be! Epiphany has a couple of meanings. In every day usage, we think of an epiphany as a “moment of sudden revelation or insight.” It’s a instance of clarity, when everything comes into focus. In religious terms, it’s “a manifestation of a divine or supernatural being.” Another big word we could use is theophany, meaning appearance of God. We’ve had these before–remember the Burning Bush? But today, we celebrate Epiphany–capital E–the holy day which commemorates the manifestation of Christ to the Gentiles who are represented by the magi.

Oh, the Wise Men. I think we often miss the point of the wise men.  It’s easy to get caught up in the logistics–what did they really bring to Jesus? Some claim they were there the night Jesus was born. Others say they visited a toddler-aged Jesus. They have traditional names:  Melchoir, Balthazar, and Casper, but we don’t know that for sure. Really, their face time in the Bible is minimal. In fact, the Bible doesn’t even tell us how many there were. It’s tradition that dictates the number three.

What the Bible does make clear, is that it is these magi who set a string of events, unintentionally, in motion.  Because of their visit to Herod, Jesus and his family must flee to Egypt–we get the first taste of the hardship Christ must endure and of the way God cares for him.

Historically, these wise men are viewed as the first Gentiles to become Christian.  This is important for us.  You see, the prophecies all speak of a Jewish Messiah. That’s what and who the Jews were waiting for–a Messiah that would come to save his people. They were thinking chariots and horses–a King. He certainly wouldn’t come as a child and certainly wouldn’t come for the Gentiles. You see, for the Jews folks were dividing into two groups–Jews and everyone else. The Messiah was supposed to come for the Jews, NOT everyone else.

Yet, there’s a second part to this story, the part that comes after the shiny new gifts and the star. It’s a single verse, the last one in fact: “And having been warned in a dream not to return to Herod, they left for their own country by another road.” (Matt. 2:12)

You know, when I remember hearing this story as a child, the magi were always lauded for the way they stood up to Herod—for the fact that they went home by another way to keep the Christchild safe. That act was viewed as honorable, noble, salvific, even.

But now, I wonder if it isn’t a cowardly act. Now, let me be clear—the Wise Men clearly saw and acknowledge the Christchild for what he was—Christ. And that recognition is the first connecting point gentiles had with Jesus, we had with Jesus. And that’s great.

But these were clearly men of authority, men of power. And despite being in a foreign land, they had the opportunity to speak truth to power. They had the chance more than an unmarried maiden, more than a baby, more than nearly everyone else in that society to confront Herod. But instead, when it became clear that they were in too deep, they “left for their own country by another road.”

I wonder how often we leave for our own country by another road; I wonder how quick we are to avoid the conflict and hightail it out harm’s way. 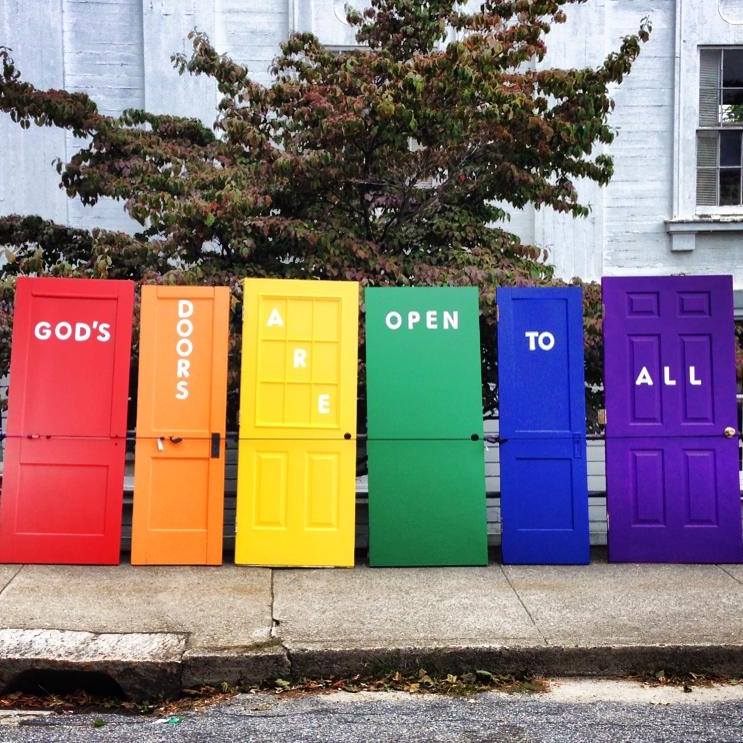 Two Septembers ago, we debuted God’s doors. They’re our rainbow doors that we lug in and out of the church every time there’s a big town event. We put them along the Reynolds Street railing or on our front steps.  Each door has its own word, and when they’re lined up they read, “God’s doors are open to all.” We had become Open and Affirming (in churchspeak, ONA) in June of 2014. It’s a UCC (United Church of Christ) designation that means we welcomes everyone specifically our Lesbian, Gay, Bisexual, and Transgender sisters and brothers,  and we wanted a way to let others know that when we say everyone is welcome, we mean it.

So, we found six old doors, painted them up and put them out. And the response has been tremendous. They’ve been highlighted by a national non-profit working to renew the mainline church; they’ve been replicated across the country—Illinois, Iowa, Rhode Island to name a few places churches were directly inspired by our own. They’ve even gone out on tour—right now they’re in Mansfield, soon they’re headed to Ledyard.  Since they’re on tour, our Fellowship and Development board members, Anna and Allison, decided we needed something like that for the holidays. And so we brainstormed and came up with our wreaths—each on a different colored stand with matching lights and bow. And a very witty and punny sign that reads, “Proud to help make your Yuletide Gay.”

Like the doors, our wreaths have nearly gone viral. I see them posted all over Facebook. My colleagues are all jealous that we’re willing to so boldly proclaim that when we say everyone is welcome, we mean it.

I know for some of you, those wreaths seemed a little too bold—not that you disagreed with the sentiment, just that you were afraid it might make us a target. It’s also no secret that making a bold proclamation of God’s love can often draw the ire of those whose view of God is more limited. The truth is every day I come to work, I look to see if our wreaths are still there.

So what do wreaths have to do with Wise Men? I tell you. On the night of Killingly’s New England Christmas, December 13, the sidewalks of Davis Park and Main Street were lined with thousands of luminaries. Westfield is a key player in making that event happen, so we had our doors wide open so strollers could visit our beautifully adorned sanctuary.  One of our magi, Suzon Jacobi, was greeting folks, when a frazzled woman approached her. 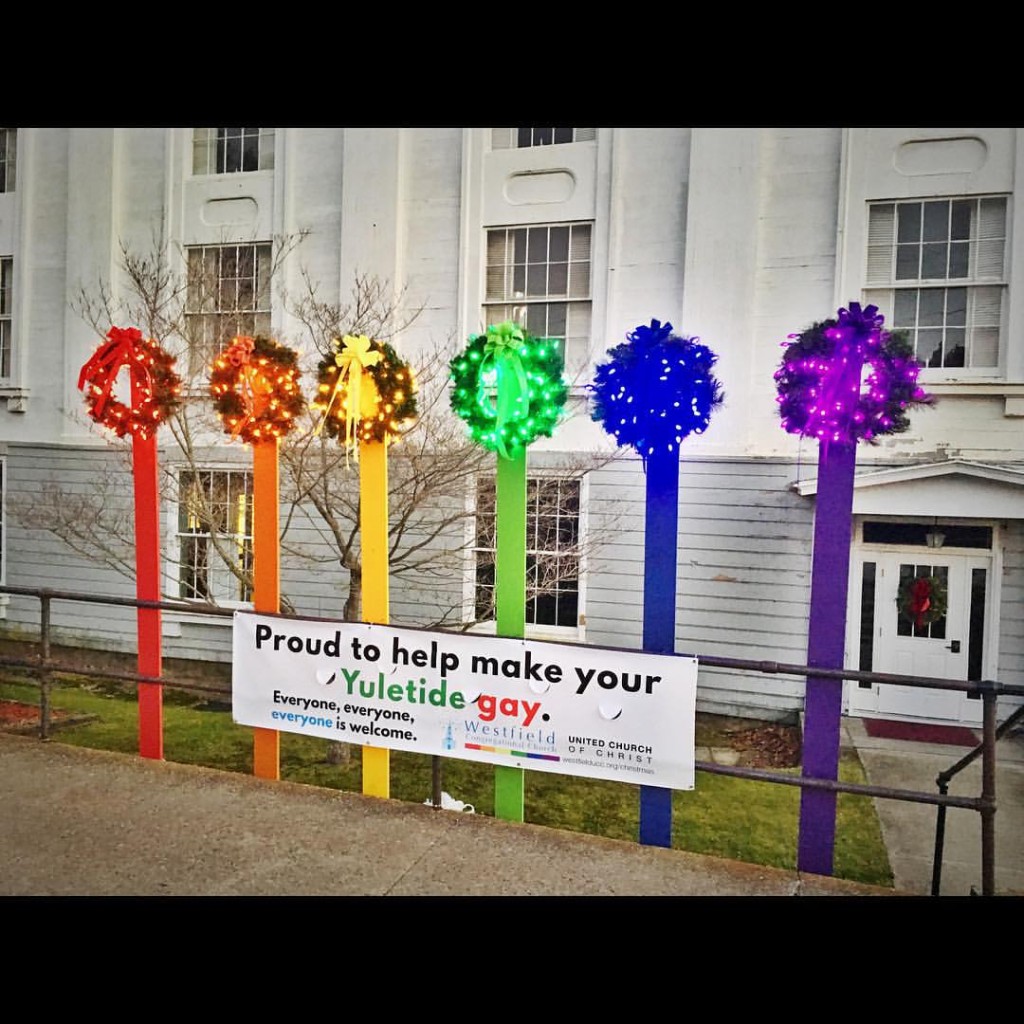 “What do those wreaths mean?,” the woman asked. “Oh,” Suzon started, “well, they mean we welcome everyone here—any race, creed, color, age, gay, straight—everyone.” That last bit seemed to be exactly what the woman was afraid of. She then proceeded to get more and more agitated with Suzon, who calmly responded to the woman’s anxious condemnations. “You’re not a Christian!,” the woman railed. Suzon, in typical Suzon fashion, looked at her with clear eyes and said, “Well, I beg to differ with you on that one.”

The woman left, and we thought the worst was over. We were wrong. She came back, this time with a Bible pulled up on her phone. She marched right up to Suzon. “It’s says right here it’s a sin. You’re not Christian!,” she shouted. “Your church isn’t Christian!” Finally, Suzon looked at her and, in a moment when most of us would have tucked our tails and ran, she said calmly and firmly, “Not here. Not now.” Then she motioned for the woman to leave.

Any number of responses come to my mind as a way of handling that—from running to pulling out an air horn and blowing it every time she opened her mouth. But one of our Wise ones knew better. She knew where she stood, where this church stood on what is apparently still a hot button issue. And she spoke the truth—calmly, firmly, faithfully. Let’s take a moment to think about the courage that takes.

One of our other church members saw the whole interchange, then walked with his family down Main Street, unintentionally following the woman who kept shouting as she strolled. Later in the week, he came to me and said, “I never realized there was that kind of hatred out there. I never fully understood why it was so important to be ONA until that night. I never knew there really were people like that out there. And I’ve never been prouder to be a member of this church.”

The truth is we all like to think that we’ll be the ones to stand up to the bully, that we’ll be ones willing to speak hard truths to those oppressing. But, it ain’t easy, is it? This new year and this epiphany, let the magi in and among us offer gifts of kindness, love, and welcome—and may we unlike our ancestors in faith who took another road home, stand firm in God’s love for all people—and speak that truth to anyone who will listen. Amen.