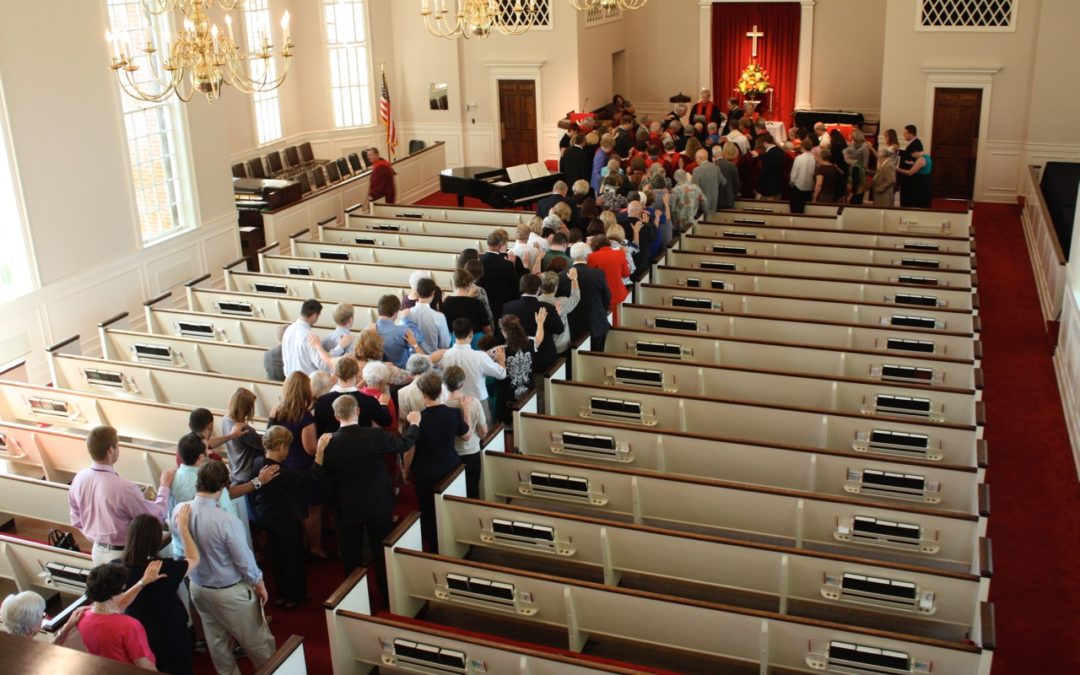 No one ever told me it’d be heavy. No one warned me that when we finally made it to the big moment in my service of ordination, when I was finally surrounded by the faithful of all generations–clergy, laity, old, young, family, fraternity brothers, church members, friends–when they all reached out toward me, hand on shoulder, over and over again that it would feel heavy.

For years I had been working toward that moment, toward the moment when the Church would say, “Yes!” to me. For years, I had studied and written and prayed and hoped. And on a September Sunday in the afternoon, the Church wasn’t the only one to say “Yes!” God did, too.

But it turns out the “yes” I had longed hoped for, worked toward, dreamed of, wasn’t the “yes” I was expecting. It wasn’t airy and jubilant. It was a weighty yes, one that took the hopes and challenges to come, bundled them together, and said, “Yes, here you go. Carry this.”

It was a physical weight, like the mass of the title and role and responsibility and expectation was all stacked on top of each other and put onto my shoulders. It was heavy. My college pastor prayed the prayer of ordination: a prayer for strength and compassion, hope and promise–a reminder that I couldn’t do it all, but God could. A choir sang Rutter’s setting of the Sarum Primer from the balcony.

God be in my head and in my understanding.

God be in mine eyes and in my looking.

God be in my mouth and in my speaking.

God be in mine heart and in my thinking.

God be at mine end and in my departing.

And while the weight was still on my shoulders, it became a shared burden. And there, on the chancel steps of Elon Community Church, United Church of Christ in Elon, North Carolina, Jesus’ words in Matthew made sense: “Come to me you that are weary and carrying heavy burdens. I will give you rest…For my yoke is easy, and my burden is light.”

When the service began, I was seated in the pews with the rest of the congregation. In our tradition, the congregation–the gathered people of God–are the ones who decide who among them will lead. They’re the ones who affirm a candidate’s call to ministry. Leaders are only leaders if people are willing to follow.

Later in the service, I found myself standing behind the Communion Table for the first time as an ordained minister. And while the moment of ordination was an emotional one, I was unprepared for what happened at that table. 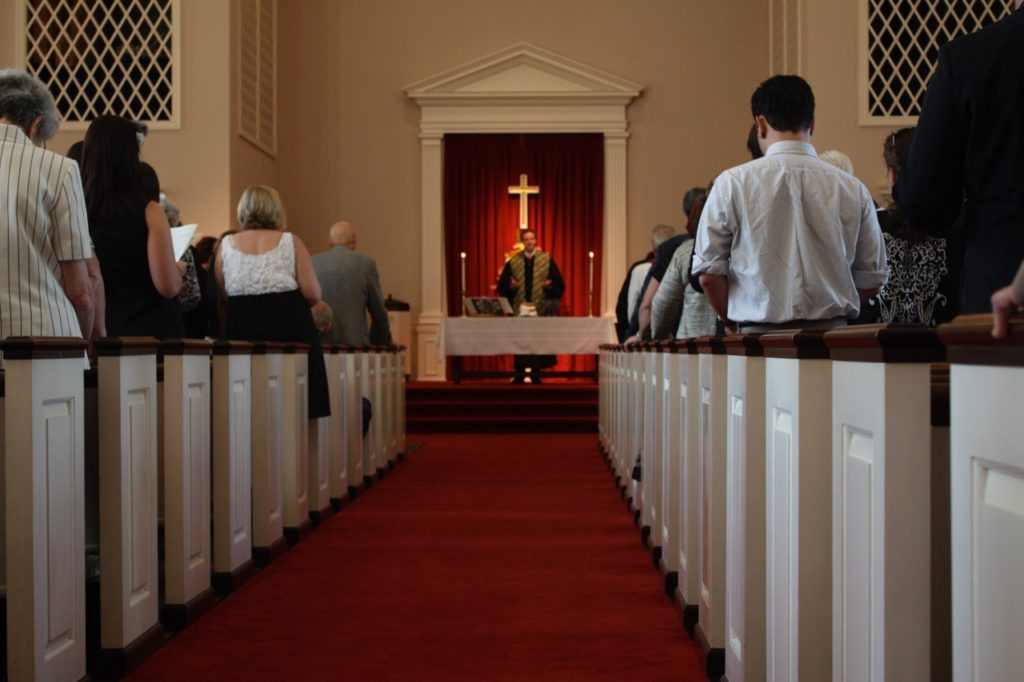 Tables are funny places. They’ve always struck me as so functional, so conventional–a necessity of convenience. Somewhere in our history, someone got tired of having to eat holding their food while sitting on the floor and decided that a series of planks set on top of some upended logs would be a better way to eat.

As I stood behind the table that Sunday six years ago, I thought of the tables in my life. I thought about the red wrought iron, glass-topped round one that sits in my parent’s kitchen. How many meals had we shared around it? How many pot roast Sunday lunches? How many homework assignments were avoided or finished (mostly avoided!) there?

I thought about the Altar in the church I grew up in, about how it was pushed up against a platform so you couldn’t stand behind it. About how rote it felt there, obligatory and in the way.

I thought about the table Jesus sat around with his friends on the night he was betrayed. The very one we commemorate each time we celebrate communion. I wondered, for a brief moment, what he’d think about all of this.

I thought about the dining room table Mama insisted we use for holidays, with it’s dark, solid wood and optional extension. I remembered how intentionally she’d set it. How she’d dust it and polish it, then let it dry. And while it was drying, she’d go dig through the linen closet to find just the right tablecloth–rabbits for Easter, turkeys for Thanksgiving, Christmas Trees for Christmas. She’d heat up the iron and press it (and the matching napkins). Then carefully, methodically, almost meditatively, lay it all out–each piece in its place.

I stood behind the Communion Table, and began. And a few lines into the liturgy, I found myself overcome with emotion. How long I had worked for this and prayed about this and dreamed about this! How scared I was for what it all meant–about what it meant for me and my relationships and my future! How much I missed my mother who would’ve been so proud. Who is so proud.

Now listen, before I continue, there’s something you should know. I’m an ugly crier. I hate it about myself; I avoid it all costs, but it’s the truth. And I know that I’m an ugly crier. Usually, I can feel it boiling up in me, and so I try to head it off before I make a scene which usually means that at some point I stop breathing. You read that right. PRO TIP: Not breathing does help you not make a scene. For a few seconds. Until you have to breathe again, at which point I inevitably wheeze in what must come off as an entirely overdramatic plea for attention when, of course, that’s the last thing I’m looking for in that particular moment.

I stood behind that table, and the emotion of the day took over. I couldn’t stop it. So I didn’t. And the most remarkable thing happened: I saw the Church.

Here’s what I mean: When I stood behind that Communion Table, unable to speak through my tears, the congregation that had gathered that day didn’t roll their eyes. They didn’t look at their watches and wonder, “how much longer?” They held me. Not with their arms, but with their hearts. During that piece of the service, I stopped four or five times, and each time as I struggled to gather myself, I could feel the love radiating from the people in the congregation. Some of them held out hands of strength. Some of them cried along with me. All of us were in it together. Turns out, that’s the Gospel.

And I realized that in the midst of a service where I was charged to care for God’s people, they were caring for me.

Over the years, I’ve grappled with what it means to be ordained. I’ve wondered why. I’ve wondered what the significance of it is. Sometimes, people treat me like I’ve got it all figured out (I don’t) or that I’m a super Christian (I’m not) or that there’s something mystical or magical about my presence in a church (Nope!). What then? What makes it so special for me to be the one to a congregation instead of anyone else sitting in those pews. Jesus didn’t say “Do this in remembrance of me, but only if you have an ordained clergy person who’s passed their psych evaluation, a background check, and their ecclesiastical council.” He said, “Do this and remember me.” So why ordination?

I’ve realized that my primary role as an ordained minister is to be a keeper of the story. What story? Well, for starters, the story of Jesus–a story we tell in Word (preaching) and in Sacraments (Holy Communion and Baptism). It’s a story anyone can tell, a story that belongs to each of us. But those of us who’ve been ordained have been charged to keep the story and to be sure it’s being told faithfully. It’s a story of darkness and light, a story of hope and fear, a story of death and new life. It’s a story of hardship and loss and promise and grace. It’s a story of being in it together–in this faith, this life together.

Sometimes, I look out at my congregation in Killingly, Connecticut and wonder, “How’d I get here?” I see people looking back at me, watching to see how I respond to our church members with special needs or our children or world events. And I realize, they’re listening to me tell the story.

But what they don’t realize (at least I’m not sure they do) is that they’re telling me the story, too–a story that reminds us that we’re a family. It’s a story that’s been told to me for years now–at countless Vacation Bible Schools, through my Mama playing old hymns on the piano, through a congregation in Elon, North Carolina who took a college kid in and claimed him as their own then said, “YES!” when I said, “I think I’m being called to the ministry.” They said, “YES!” when I went to seminary. And “YES!” when it was time to be ordained. And they said, “Yes, yes, yes” as I wept my way through Communion that day. 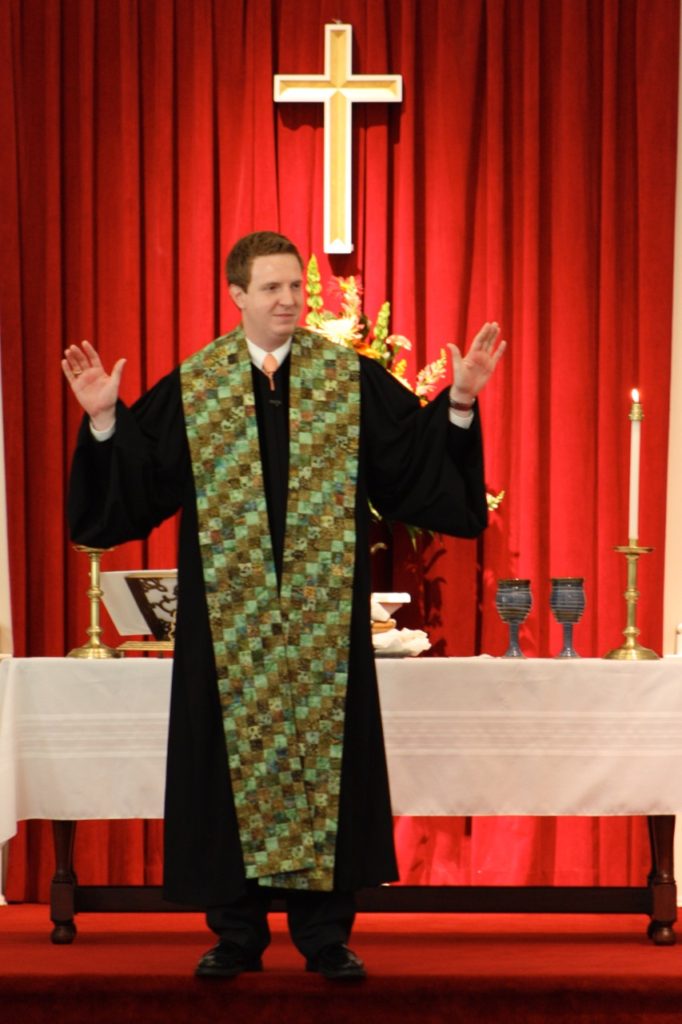 I was ordained as a Minister of the Gospel in the United Church of Christ on September 19, 2010 at Elon Community Church, UCC in Elon, North Carolina. For the ordination purists out there, yes I wore a green stole at an event traditionally celebrated by wearing red. My Dad had this made in memory of my Mama and wearing it that day was the right call.