Prayer Stations: We Are Called 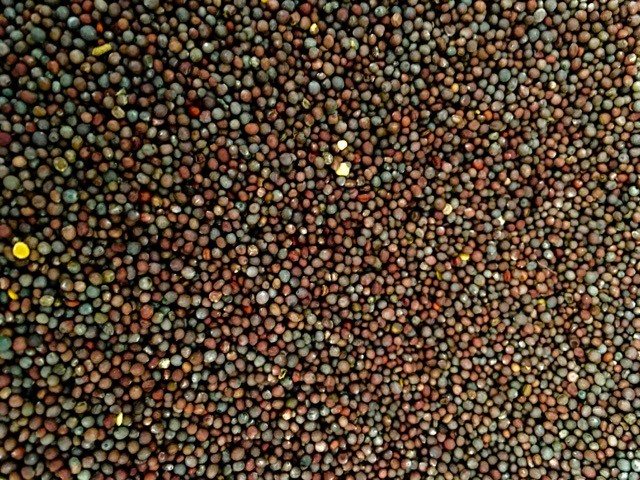 We tried something new at Westfield this morning. Well, at least new to us. Instead of a sermon, I invited the congregation to wander around our sanctuary and into our narthex to eight prayer stations all created around a single theme: who we are called to be.

We are a singing church. By that I mean, we sing a lot. As in, all the time. And this morning was no different. We began our scripture readings with a wonderful Mark Miller piece called Draw the Circle Wide. It’s a bit of a Westfield anthem these days–we often sing it at the close of worship. We sing it every time someone joins the church. This morning we sang it in between our scripture readings. The passages all pointed to who we are called to be.

We began with Joel:

Then I saw a new heaven and a new earth; for the first heaven and the first earth had passed away, and the sea was no more. And I saw the holy city, the new Jerusalem, coming down out of heaven from God, prepared as a bride adorned for her husband. And I heard a loud voice from the throne saying,‘See, the home of God is among mortals.He will dwell with them;they will be his peoples,and God himself will be with them; he will wipe every tear from their eyes.Death will be no more;mourning and crying and pain will be no more,for the first things have passed away.’

And the one who was seated on the throne said, ‘See, I am making all things new.’ Also he said, ‘Write this, for these words are trustworthy and true.’ Then he said to me, ‘It is done! I am the Alpha and the Omega, the beginning and the end. To the thirsty I will give water as a gift from the spring of the water of life.’

And finally, from Matthew:

When Jesus saw the crowds, he went up the mountain; and after he sat down, his disciples came to him. Then he began to speak, and taught them, saying:

‘Blessed are the poor in spirit, for theirs is the kingdom of heaven.

‘Blessed are those who mourn, for they will be comforted.

‘Blessed are the meek, for they will inherit the earth.

‘Blessed are those who hunger and thirst for righteousness, for they will be filled.

‘Blessed are the merciful, for they will receive mercy.

‘Blessed are the pure in heart, for they will see God.

‘Blessed are the peacemakers, for they will be called children of God.

‘Blessed are those who are persecuted for righteousness’ sake, for theirs is the kingdom of heaven.

‘Blessed are you when people revile you and persecute you and utter all kinds of evil against you falsely on my account. Rejoice and be glad, for your reward is great in heaven, for in the same way they persecuted the prophets who were before you.

‘You are the salt of the earth; but if salt has lost its taste, how can its saltiness be restored? It is no longer good for anything, but is thrown out and trampled under foot.

‘You are the light of the world. A city built on a hill cannot be hidden. No one after lighting a lamp puts it under the bushel basket, but on the lampstand, and it gives light to all in the house. In the same way, let your light shine before others, so that they may see your good works and give glory to your Father in heaven.

And with those read, I offered a few brief words of introduction about the stations and we were off! I meant for folks to pick one or two stations and (foolishly!) thought it’d all take 15 minutes, maybe 20. Forty five minutes later, we were wrapping up that part of the service (to be fair, our services rarely are right an hour. It’s not uncommon for us to worship for an hour and ten or fifteen minutes).

And they were forty five minutes filled with the most stirring, meaningful, intentional, hopeful worship we’ve had in a while.

Here’s what we did, each with the theme “We are called to…”:

It started in the narthex with three stations.

This station featured a mirror covered with fabric. Church members were asked to lift the fabric and reflect (ha!) on what they see. Then, pick up a card with Genesis 1:27 printed on. Then look again. The instruction card posted at the station read this way:

We are called to love, not just others, but ourselves swell. Look behind the fabric and answer this question:  what do you see?

Now pick up a card.
Read it.
Look again. 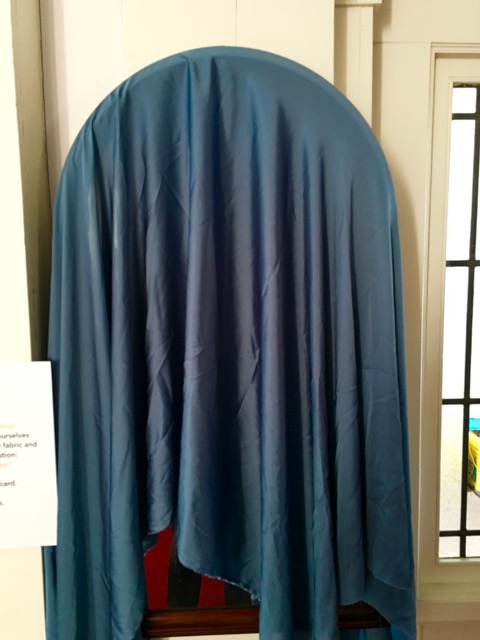 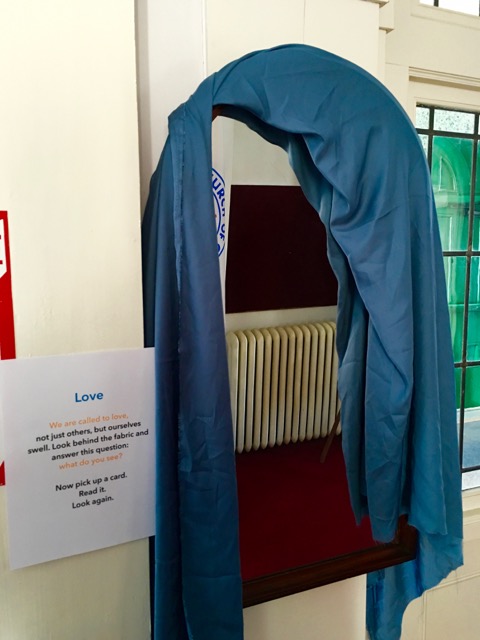 Our old church is blessed with lots of old things, one of the most charming of which is this old chalk board. A couple of folks hauled it up from the ground floor and placed it in our Narthex and wrote across the top, “I am Grateful for…” Next to the board was a basket of chalk. The goal was simple: write what you are grateful for.

We are called to be grateful. Write what you are grateful for on the chalkboard as a prayer of thanksgiving. 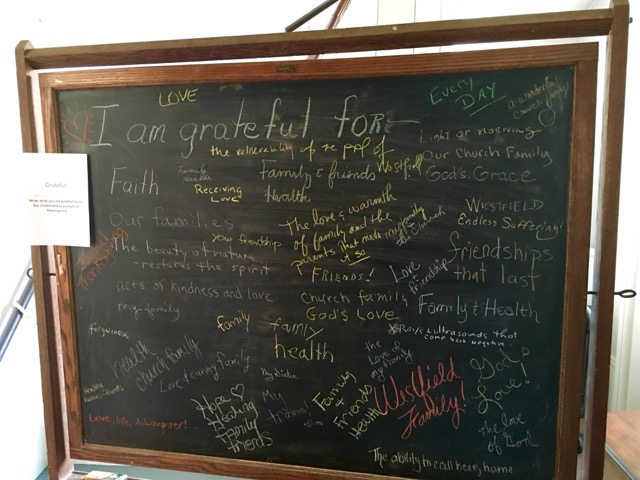 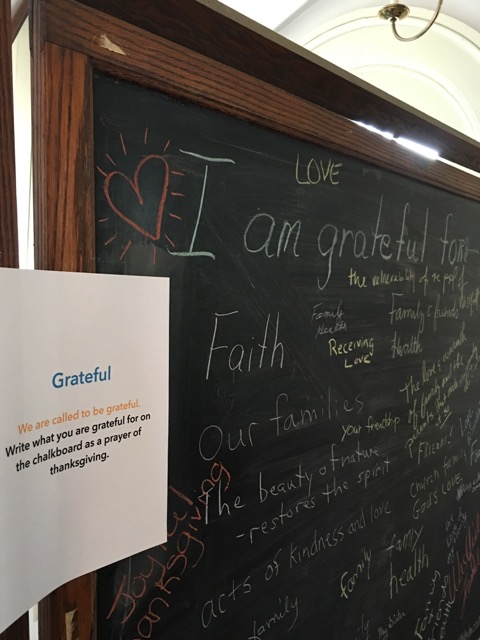 It’s so easy for us to get bogged down in all the adult things we’ve got to do. This station reminded our members of God’s ongoing creative power that we can be part of every day. I didn’t think people would go for it. I was wrong. The instruction card read:

We are called to create. God’s creative power didn’t end in Genesis. Creation is an ongoing event. Create something with the items provided as an act of prayer. 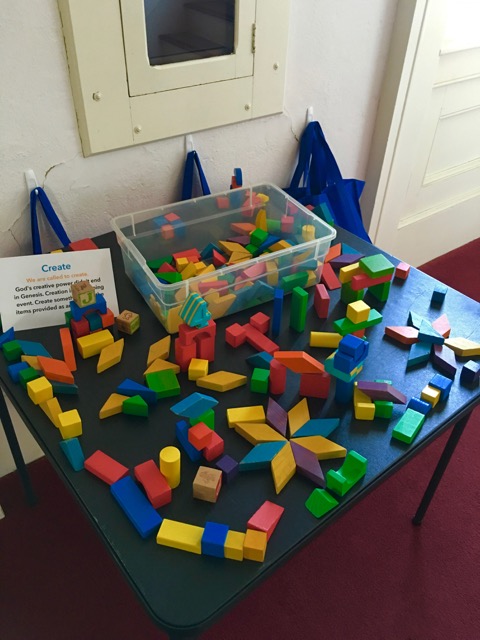 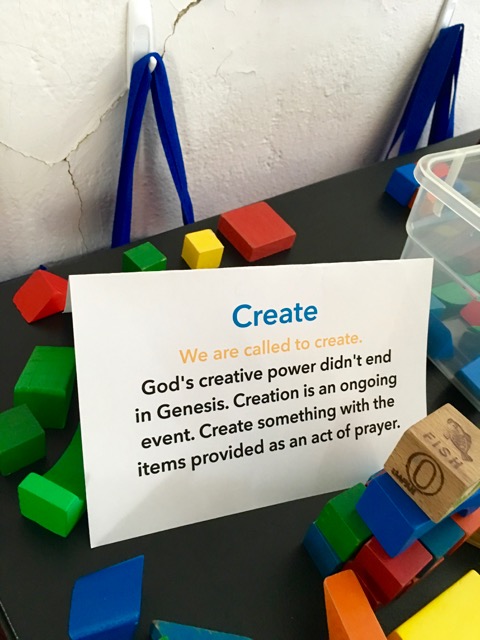 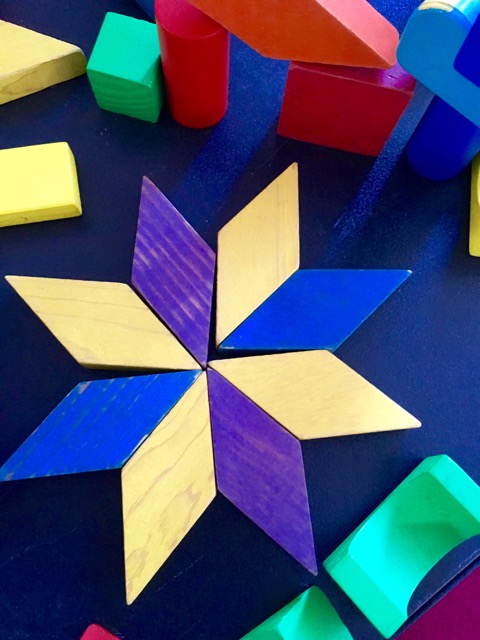 This station was the most surprising. People in the North don’t always come across as willing to be terrible vulnerable. And walking up to a station offering prayers of healing makes you just that: vulnerable. Once again, I didn’t think people would go for it. And once again, I was wrong.

I thought we might have a few, maybe six or so would take pity on me sitting up there and come up. One person approached, then another. Then fifty. And we prayed. We prayed for heartache and hardship, for illness and fear, brokenness and celebration.

Here’s what the instruction card said:

We are called to heal.
Today we are offering prayers of anointing and healing.
You can kneel or stand.
Offer a request if you like. 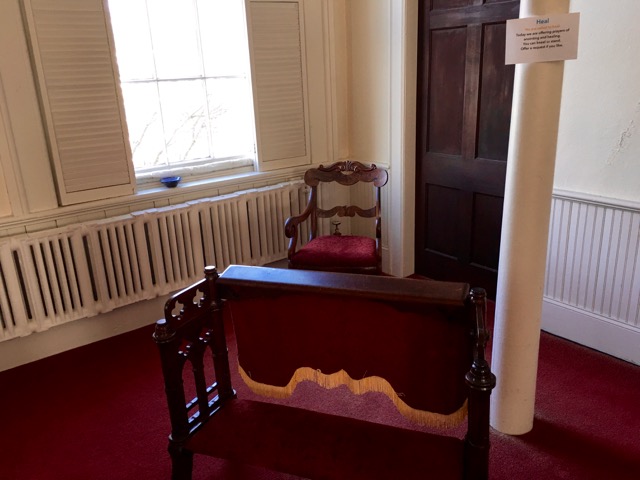 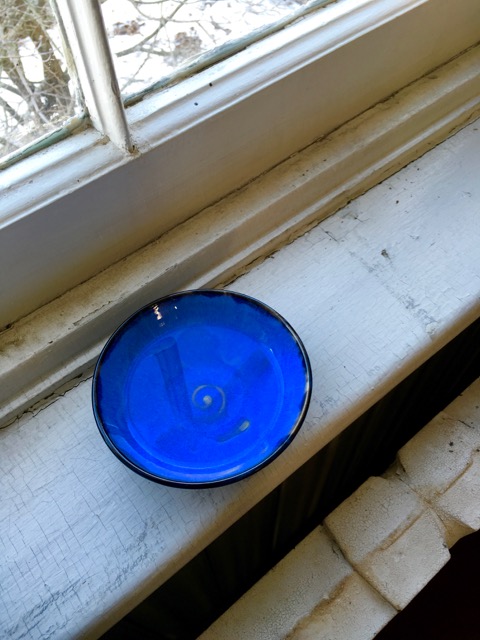 Never has a pound of mustard seeds made more of an impact. Here’s what the instruction card said:

We are called to be faithful.  Take a moment to run your hand through the bowl of mustard seeds. Remember Jesus’ words: “Truly I tell you, if you have faith as small as a mustard seed, you can say a to this mountain, ‘Move from here to there,’ and it would move. Nothing would be impossible.” 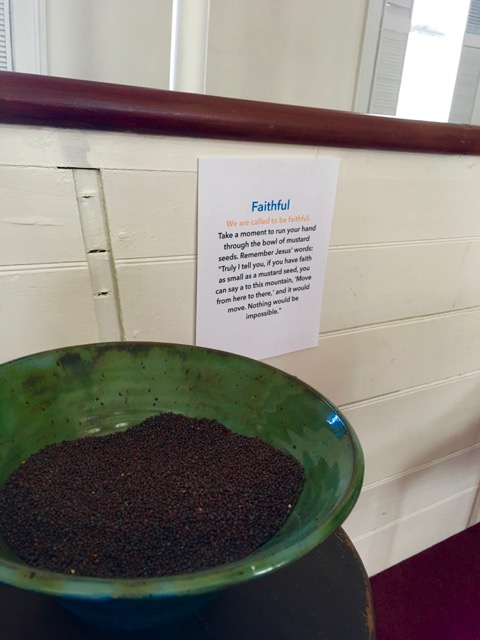 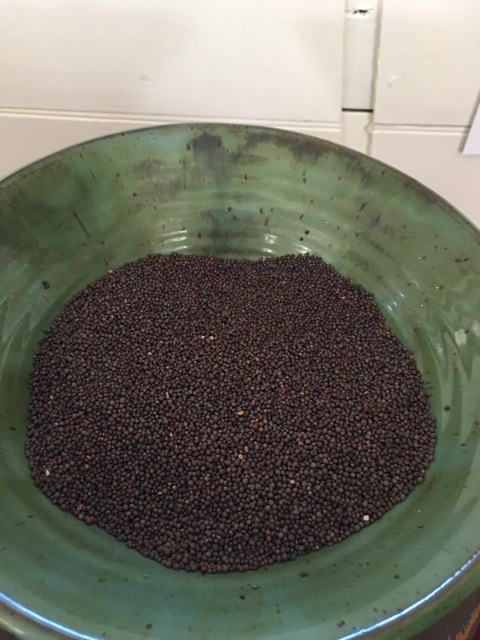 We pride ourselves on welcoming everyone, everyone, EVERYONE. Still, there are those missing. Our altar table was covered with candle along with an invitation for folks to light them as they pray for the ones who aren’t here. The card read:

We are called to reconcile. Paul tells us in his second letter to the church in Corinth that we should be ministers of reconciliation. Light a candle for the people who are missing from this room.  Who isn’t here? Who haven’t we welcomed? Who do we need to be reconciled to? 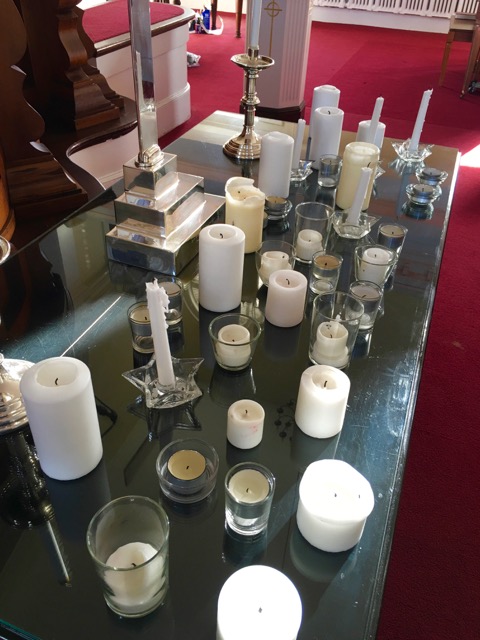 A bowl filled with water and salt and a plate of salt made for a meaningful reminder of God’s heartbreak at the brokenness of the world and our call to journey with people through their sadness and rejoicing. The instruction card read: 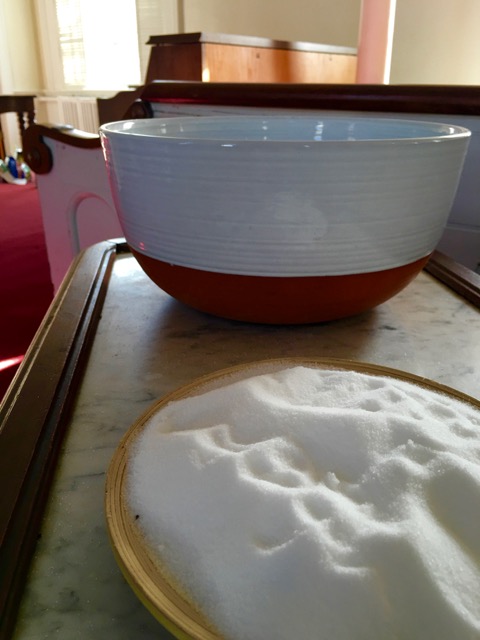 Through it all, we are called to serve. I bought a bunch of socks at BJs, some gallon storage bags, and a ton of bandaids (although, as it turns out–not enough!) Our action was a prayer in itself. Here’s how the instruction card read:

We are called to serve. Help create foot care kits for those in need. Put a pair of socks and a variety of band aids in each gallon-sized zipper bag. Place completed bags in the basket. 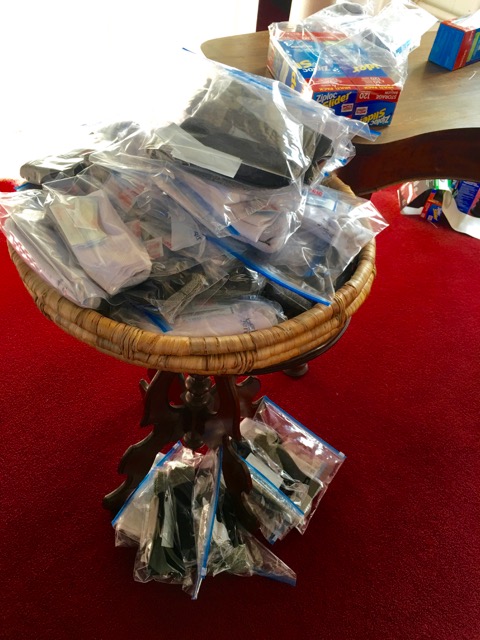 There you have it, our eight “We Are Called” stations. I was blown away y how my folks connected to them and their faith.  Before I left church for the day, I checked in on Facebook:

Days like today humble me. We tried prayer stations during worship this morning instead of a sermon. There were eight to choose from. I was at a station for healing prayer. I was hopeful a handful of people would try it. There was one. Then two. Then fifty. I asked every one what we should pray for. Families, illness, brokenness, heartbreak, celebration–it ran the gamut. And we prayed: sometimes with a smile or chuckle, sometimes with tears streaming. It took WAY longer than I intended (sorry, Westfield folks!) but by the end I was reminded just how much I love these people. They are mine. I am theirs. And it’s a honor to walk with them.

It’s a gift, this calling. One I’m so, so grateful for.

Want to give it a go in your church? Click here to download the cards in pdf form.